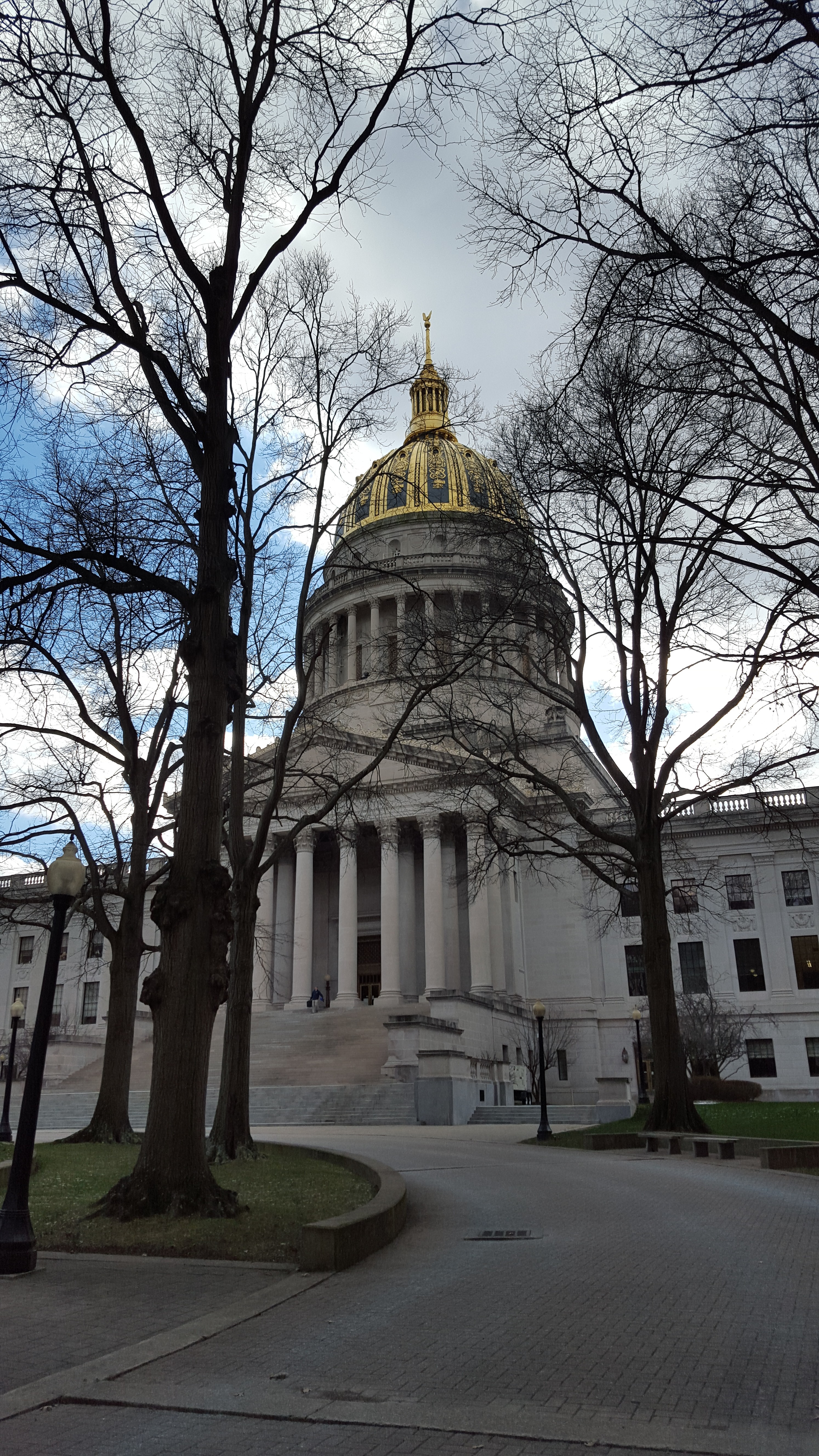 In Charleston, West Virginia’s capitol building casts its shadow on the state museum.

It’s oddly fitting given the historical context. A similar shadow loomed over West Virginians during the Great Depression, when the state levied a penny tax to build the $10 million politician’s den, equipped with seven different types of marble, Italian alabaster and an impressive 4,000-ton chandelier. The rest was paid for with the insurance money from the past two capitol buildings which both burned to the ground.

I could think of better uses for the pennies, especially since nowadays West Virginia congressional delegates only spend January through March in the building.

The representatives are part-time, paid about $20,000 per year for their governmental duties.

Obviously this isn’t enough to survive on in America, so nearly all the representatives have day jobs; some are farmers, some are bankers, others are students (Sarah Blair is the youngest member of the House at 18 years old). 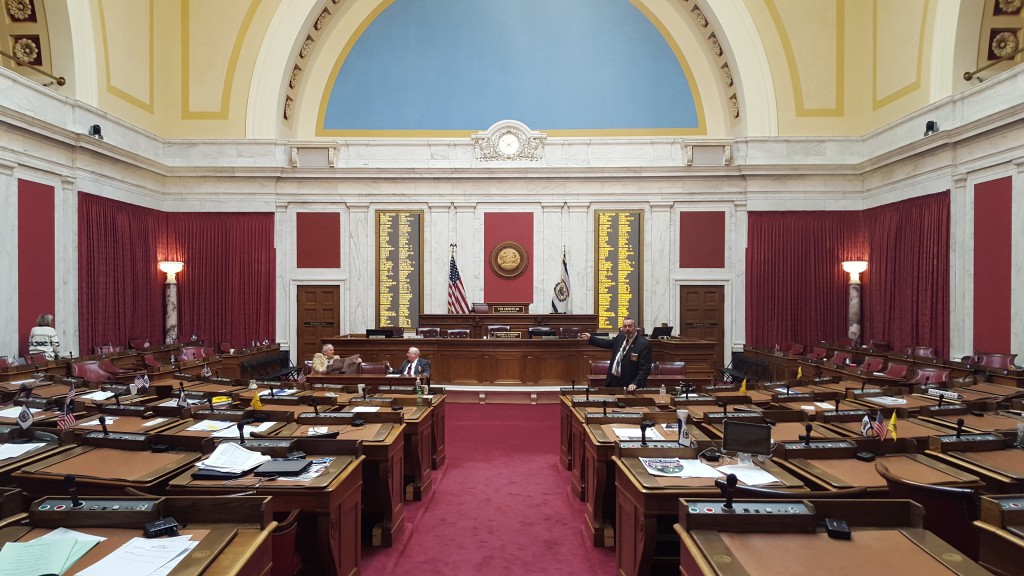 This makes me happy. This means the delegates get some time on Earth, not removed from the hardships of a state that’s been desperately trying to diversify its economy since we’ve begun reducing our reliance on coal.

The state is now making a bid for tourist dollars, with the Capitol housing a few dozen pamphlets on West Virginia’s magnificent state parks and high-energy adventures, such as white water rafting and ziplining.

“It is part of the universal desire to return to a simpler way of life, to traditional American values that have become obscured in the jet stream of contemporary society,” a quote inscribed at the West Virginia State Museum reads.

I don’t particularly care to stare at dead bugs, but I’m studying the butterflies mounted underneath glass for minutes. I’m not seeing much, because really I’m just eavesdropping on the conversation beside me.

A young black man with a thick accent I can’t place is talking to a young white woman:

“Why use religion to explain anything in a secular country?”

It’s rhetorical, but she’s starts in.

Most people that came to America in the first place were Christians, she says.

True, but does that explain the bigoted nature of opposition to human rights reform today?

Part of the First Amendment of the Bill of Rights, which was adopted in 1791, prohibits making laws respecting an establishment of religion and impeding the free exercise of religion.

“In my personal opinion, the issue of gay marriage should have stayed with the state. Because if it’s a federal government ruling, what rights do the states have?” she says.

She doesn’t agree with Christians getting divorces either. I nearly choke looking at a portrait of some influential West Virginian. Seriously?

The problem with these narrow-minded blanket statements from young people is that they don’t take into account all the horrible shit that can happen throughout life. A man whose wife physically abuses him shouldn’t have black eyes until he dies. A woman that gets raped shouldn’t have to have to relive that trauma.

West Virginia might be a beautiful state but in an era of increasingly incendiary Republicans, the beliefs of its people are enough to make you think twice about seeing the natural wonders.

Later that night, I strike up a conversation with Ryan and James asking them what other bars are worth hopping to in downtown Charleston.

“A whole bottle of whiskey can be its own tent,” Ryan says about passing out in the yard at a friend’s birthday party.

Foreshadowing for the night?

We have a couple drinks while playing pool and then they ask me to go smoke in the parking garage. Inside the car, the three of us pass a joint they rolled and the rest of my pre-rolled joint from Colorado. The conversation turns to politics.

“The local counties have been overrun by Republicans,” Ryan says.

It’s true. Even with President Barack Obama serving two terms, small towns throughout the country are washed in red.

It seems inconsistent with the liberal narrative of helping the little guy, but maybe Democrats come out stronger in national elections, viewing them as more important than local ones. I’m in a philosophical black hole, the light from my phone’s notes app reflecting off the back window when Ryan mentions he works for the state government on disability claims.

My dad recently mentioned one of his friends who takes disability for a bad back even though the guy goes to events and hobnobs. He’s skeptical of this friend’s disability and says he couldn’t do that, scam the system to not work.

“Hell no,” Ryan says. “You can scam disability, but it’ll take 30 years and it happens at the court level.”

Disability recipients must get both physical and mental health checks, and a doctor has to write off on the fact the person shouldn’t or can’t work in their condition.

Some disabilities, such as a back injury, could be hard for a layperson to spot, but that doesn’t mean the person isn’t hurting or in terms of the rules, isn’t 55 or older, has worked manual labor for years and now can’t carry more than 25 pounds.

Then there’s drug addiction. A person can’t get disability for drug addiction alone but the Social Security Administration (which disability money comes out of) acknowledges that drug addiction can cause lasting physical and mental conditions that could cause someone to be unable to work even if they abstained from those drugs.

West Virginians take more prescription drugs than any other state except Kentucky, which ranks number one in overdose deaths, according to an investigative piece in the Charleston Gazette-Mail from October 2015. “Wholesale drug distributors — not even including the two largest distributors — shipped 200 million pain pills to West Virginia over a recent five-year period. That’s about 111 pills for every man, woman and child,” writes David Gutman.

Since Purdue Pharma’s introduction of Oxycontin in 1996, West Virginia has been an opiate den.

There’s myriad reasons why a West Virginian would be trying to escape his or her reality–a lack of education, unemployment, stereotypes–but whatever they are, landlocked states like West Virginia continue to be places where rebellion comes in the form of drug intake.

We drive through the McDonalds before heading back to Ryan’s house to watch ‘It’s Always Sunny in Philadelphia’.

“The other night we drove around the McDonalds twice, the first time totally bypassing the pick-up window.”

“To be fair, we were really drunk and high so things were hectic.”

“I got two orders of pancakes, ate one and then passed out. I woke up the next morning with syrup all over myself, and then ate the other order.”

“You ate them the next day for breakfast?” Ryan asks.

“No, I’ve never eaten them the morning after. I do the walk of shame with them to the trash can.”

I trust these two enough to get in the car with them; I trust these two enough to go to their house and sit beside them on the couch. I wouldn’t have trusted the God-fearing woman in the museum. It’s because they’ve shown me their vulnerabilities and I relate to those, whereas a woman touting a literal interpretation of the Bible seems only to have strengths, championed by an old, very influential book. It’s not endearing.