Cracks in the earth breath fire and spit smoke. Toxicity hangs in the air. The trees die as their roots scorch. The pavement melts the soles of your shoes. Centralia is a ghost town where only a bull-headed handful still reside, angrily declining interviews.

Or at least that’s how the stories go. 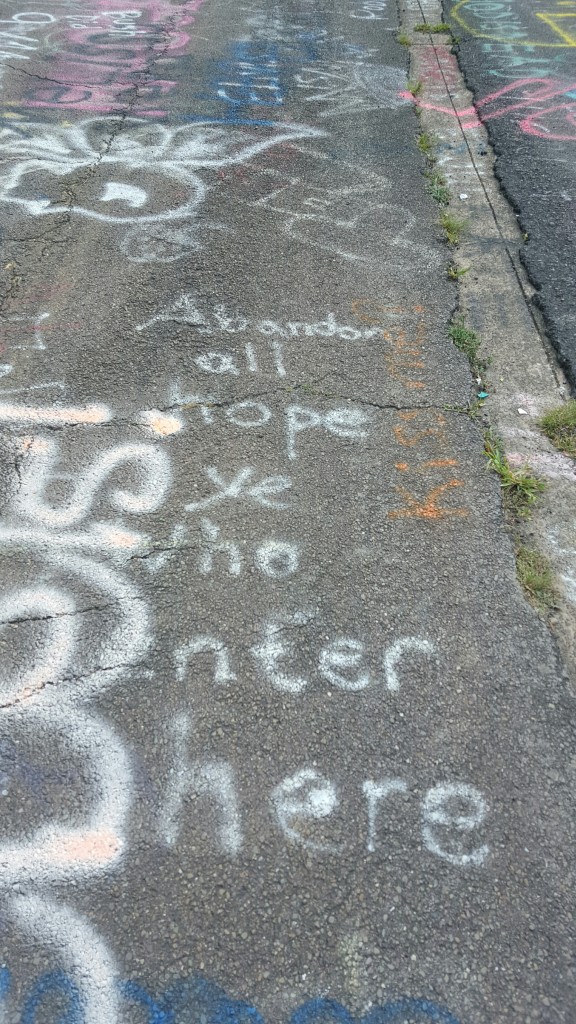 But it turns out, the grid-like roads that once passed through a small coal town in eastern Pennsylvania are now overgrown with the dense forest that thrives in the Appalachian. No smoke billows from sinkholes that act as windows to the red and orange that flickers beneath. Our lungs and shoes stayed intact.

The old highway, spray painted with love of drugs, boyfriends and dick jokes is the only thing to be see in Centralia anymore. 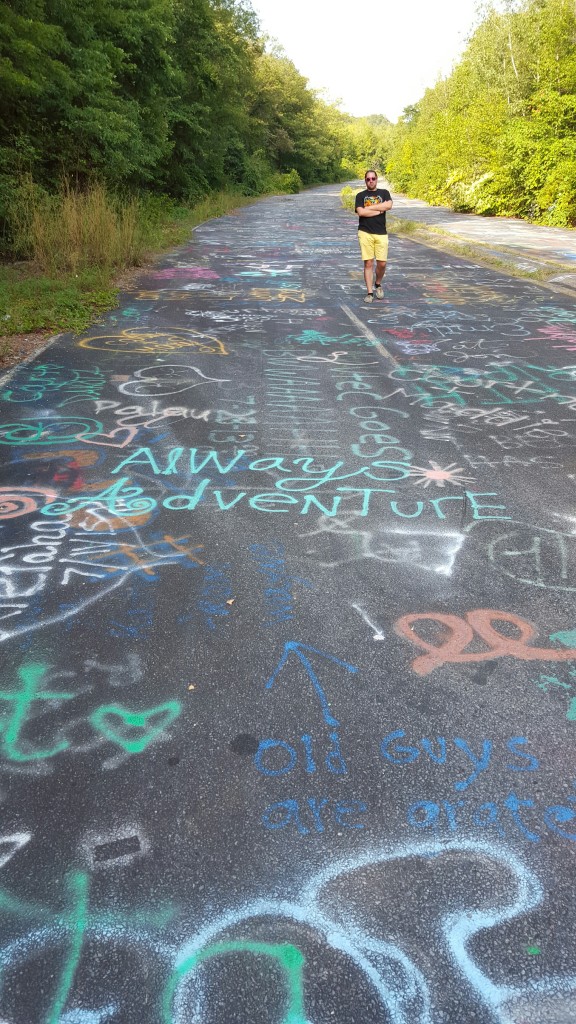 This lack of apocalyptic wasteland makes it easier to understand why residents think conspiracy.

In the early 1960s, a coal vein caught fire in the town, presumably after a trash fire spread. Attempts to put out the fire failed eight different times over the next two decades. People continued to live in Centralia. Accounts of people passing out from the fumes surfaced. And then in 1981, a 12-year-old boy fell through the ground but was rescued.

“A two-year-old could have crawled out of that hole,” says Bobby Snider, an elderly man with a ‘RIGHT TO BEAR ARMS’ belt buckle and a clockwork spit.

He walks up and asks my friend and I where we’re from. We’re reading a 2010 Associated Press article tacked to a bulletin board, chronicling the fall of the town and the battle over the land.

Around 1983, Congress budgeted $42 million to buy out the current residents and tear down houses. Most people took the money and ran. Others, citing a government conspiracy to take their mineral rights, stayed.

In the early 1990s, the government seized all the houses through eminent domain. The people that lived in their homes after the seizure were free of taxes and rent. The five or so people that still live in Centralia are technically squatters.

While the lush forest and constant sound of crickets or rustle in the trees doesn’t play to the myth of Centralia as a deadly wasteland, it’s still hard to parlay the massive government fraud angle.

“There’s a lot they don’t put in the books,” Bobby says, coming back around for more chit-chat. He’s lived in the neighboring town all his life. He worked in the coal mines, speaking highly of the job as it’s cool in the summer and warm in the winter. After the coal mines closed in the area, he became a welder. Like most elderly individuals, he’s got a story he wants to tell, gossip he wants to relieve himself of, wisdom to pass on.

The government could sell the land to a private coal mining operation that would become a very lucrative one, since according to Bobby there are 21 coal veins in the area, only one of which was affected by the fire. Not to mention, in the Centralia hills it’s anthracite, a variety of coal that has the highest carbon content but yet burns cleaner. But the few residents that still live in Centralia seem to be holding out not for the financial gains of selling the land but more for equally valid sentimental reasons.

When a group of people and their way of life is under attack, they become defensive, formulating reasons why the outside assailant is in the wrong.

We were bar hopping in Frackville, a town less than 10 miles from Centralia’s old city limits. Bar hopping is a strong word since there are only two places to imbibe. We both follow and lead a group of younger Frackville natives.

At a sports bar, we walk over to make friends. They’re magnetic, probably because they’ve spent a good amount of time road tripping all over the country together. Full of the kinds of insights you only get from roving beasts.

After I explain a little about the project I’m working on, Brian says, “We’re going to be in the paper… And not in the police blotter or the obituaries.”

It’s one of the more pertinent things I’ll hear. There’s a masochism that hangs over these sparsely populated towns across America, where residents only get the paper to see their friend’s and family’s names in the back pages. Every once in a while, the front page leads with the Hynosk’s latest efforts against the county and state governments in Centralia.

To outsiders it’s sad and even boring. So the media sensationalizes, dramatizes, squeezes any little bit of blood it can from these towns.

“But as the poisonous gases continued to seep from fissures in the ground, and as the sudden sinkholes threatened to cast people into the smoldering depths, the town emptied out,” according to a 2010 article about Centralia by the Christian Science Monitor, a publication known for it’s “nonhysterical journalism.”

That sounds pretty hysterical to me.

I can imagine townspeople, who watch their kid’s football practice from the bleachers and grab an ice cream cone with their beau, rolling their eyes. They’re stigmatized by Centralia, stained by the connotations of coal towns and holdouts. Sometimes they fight it; many times they just give in… like the bar called the Black Diamond and the youth football team of the same name.

The economies thrived on the coal industry and to a certain extent it still does. But as Centralia proves, an economy can mean more than money, it can mean identity. When one suffers, so does the other, and it may be the latter that proves the biggest loss.