It pains me to write that sentence, but in a nuanced continuum of cause and effect and unintended consequences, Trump’s stance on immigration could save Lake Champlain from pollution. 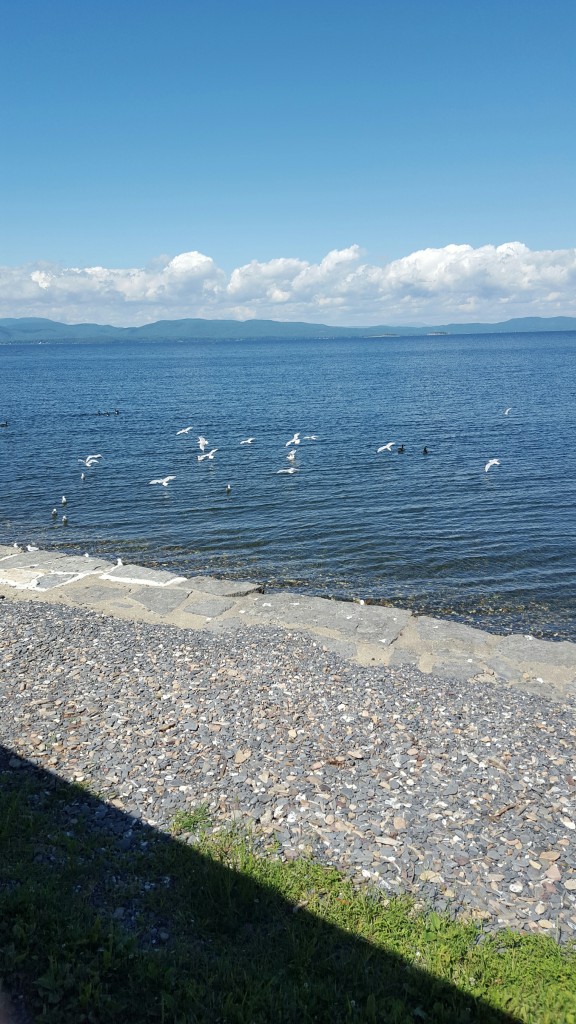 Illegal immigrants from Central and South Americans allow the mega-dairy farms in Vermont to exist. The large farms run 24/7 and milk their cows three times a day.

Cows, it should come as no surprise, eat grass. But grass fed cows don’t produce as much milk as those that gorge on corn. So the large farms grow corn to feed the cows. Farmers must use artificial fertilizers and spray the corn with pesticides.

Farmers apply chemicals to the land, and the excess runs off into Lake Champlain. These chemicals add to the phosphorus deposits in the lake, causing a green algae to form on top of the water. Swimmers then have to wade through the unsightly slime. Plus the algae uses large amounts of oxygen, limiting the amount of O2 for lake bed plants and fish, eventually killing off these creatures.

“So if Donald Trump becomes president and therefore arrests and deports all of the illegal immigrants in Vermont, many of the large dairy farms would close” reducing the runoff into the lake, says James Maroney Jr., an art dealer, ex-dairy farmer and self-described, societal gadfly.

Maroney makes the case (all the while I’m cringing), but, sigh of relief, doesn’t actually support Trump’s racist, incendiary and shallow remarks. Trump “is a maniac,” he says.

The rise and influence of large farms will be tough to reverse.

Liberal Vermont is welcoming to everyone. In the state, there’s no social opprobrium to employers hiring illegal immigrants. Vermont is one of the best places for migrants to pick up work, with a green card not far behind.

And these foreigners deserve it. They work nearly 60 hours per week and get paid minimum wage, if that at all.

“Most dairy workers are paid in kind with housing and beef or milk,” Maroney says. “No one in their right mind would want to work in the dairy business given the conditions.”

“You can’t get Vermonters to do that work,” Maroney says. Neither can you get the homeless transplants that sit on heavily-trafficked Burlington streets, collecting dollars from tourists for a Milwaukee Beast or an acid tab, to work at the dairy farms.

The low-pay can be linked back to Franklin D. Roosevelt’s New Deal, which included the Fair Labor Act. On the surface, the act sounds like it would give rights to laborers, but the program excluded agricultural workers. Roosevelt excluded these workers in an effort to get the support of southern plantation owners that would not have voted for his other progressive policies if they had been ordered to pay their black workers more, says Maroney.

And the system is even more convoluted. Today, the dairy industry is propped up by federal and state subsidies in a way that makes it almost impossible to manage, Maroney says. In order to keep the price of milk low, the government gives farms subsidies to produce more. And according to Maroney, way more than necessary.

“The farmers are drowning in excess,” he says. “Americans take cheap food as a birthright; the farming industry is in such trouble.”

In 1940, 33% of American’s paychecks went towards food. Today, only 8% to 9% of an American’s wages go towards purchasing food.

And because 99% of politician’s constituents are consumers, “who do you think they’re going to favor?” asks Maroney.

The drawbacks of conventional agriculture, that which uses artificial fertilizers, is not relegated only to Vermont. Conventional farming, is the second largest generator of global greenhouse gases.

So what’s the solution? Supporting the move to eco-friendly production and organic options, is a start. Suck it up and pay a little more for your produce. While Maroney would be willing to say that a conventional apple is the same as an organic apple, they aren’t produced the same. And the environmentally safe production is what you’re paying for.

Not too long ago, four million dairy farms produced milk across the U.S. Today, less than 40,000 exist. In Vermont, a state known for it’s dairy, producing American splurges such as Ben & Jerry’s, only about 900 dairy farms still operate.

Smaller farms have been unable to keep up with production and prices.

The 1400 acres of Shelburne Farms makes it one of the smaller dairy farms in Vermont. It doesn’t produce all that much milk. It’s been able to survive by changing its business model, appealing to what Americans are willing to pay for: education. Fun fact: Shelburne Farms was designed by Fredrick Law Olmsted, the landscape architect that designed Central Park in New York City and the grounds surrounding the United States Capitol building in Washington D.C.

In the early 70s, descendents of the original mastermind, Dr. William Seward Webb, transformed Shelburne Farms from a private business to a nonprofit organization.

Today tourists from all over the world tour the farm for $11 a pop. Kids run around chasing chickens and a few poor cows deal with small hands awkwardly squeezing her udders. Fresh bread and artisanal cheese is made on property as well.

But the most interesting part of Shelburne Farms is the more than 27,000 students that attend the educational programs each year. The curriculum focuses on the three E’s: environment, economy and equity.

It’s a provocative move from the three R’s–reading, writing and arithmetic. The three E’s will continue to be relevant, as future generations focus less on rote learning–memorization based on repetition–and more on problem-solving.

The adaptation to the changing times is commendable. Hopefully young minds are learning the causation chain. And figuring out new ways to deal with the dilemmas they were born into.