A hip, creative culture has taken over the ruins of the industrial age.

This is no more apparent than in the Rust Belt. Clevelanders are jacks of all trade. And in turn, the city itself is adaptable, which has helped it survive the manufacturing exodus starting in the 70s.

“There was just a lot of abandoned buildings and land that was just being used as neighborhood dumps.”

Becky calls herself a chameleon. She has a bachelor of arts in Italian. Five years ago gave up her gig managing a bar/restaurant in Cleveland Heights to develop synthetic platelets that rush to the site of an injury for the biomedical engineering department at Case Western Reserve University.

Her job is supported by grant money, like many Clevelander’s salaries.

Becky enjoys the job, financed usually by the Department of Defense or the National Institutes of Health. She learns something new everyday, but it isn’t her passion. Her boss is moving to Baltimore and taking the program with her. Becky has been asked to come along, but it’s time to try something new. She tosses around the idea of opening an art gallery. She’s always dreamed of living on the beach in Hawaii or Costa Rica, maybe even Cuba. And starting in the next week, she’ll be helping out at the local winery. 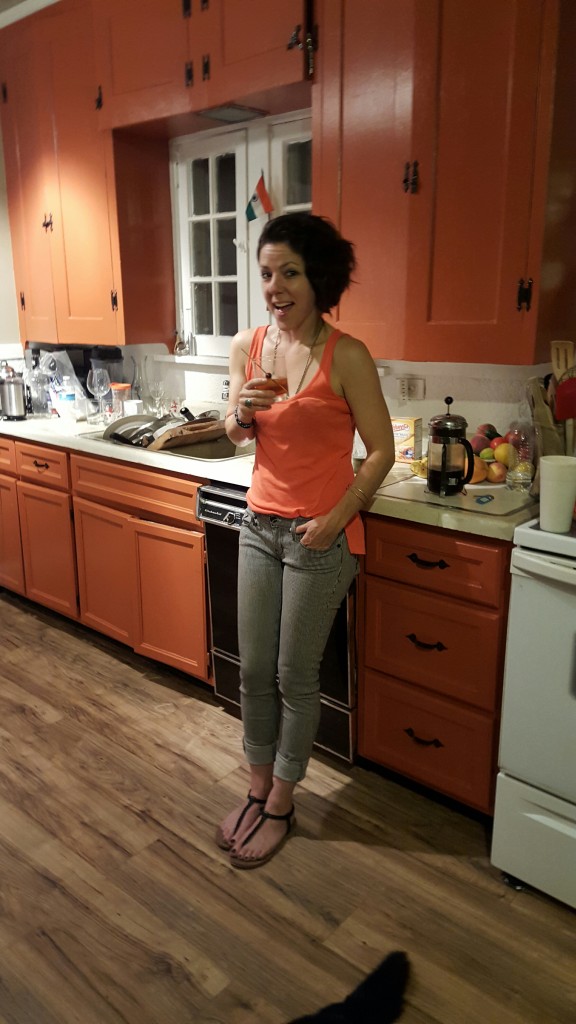 Paul Mason talks about these career moves his work on postcapitalism. “As a result, large parts of the business class have become neo-luddites. Faced with the possibility of creating gene-sequencing labs, they instead start coffee shops, nail bars and contract cleaning firms: the banking system, the planning system and late neoliberal culture reward above all the creator of low-value, long-hours jobs.”

The tone of this particular paragraph seems dismissive (maybe I’m reading this wrong Mr. Mason?), as if starting coffee shops and nail salons is of lesser stature than building gene-sequencing labs. The argument could be made that gene-sequencing labs help humanity more so than a nail salon, but my instinct is to feel offended by this.

Young people move into these jobs for a break as companies looking to minimize costs put maximum work loads on employees. For instance, if I’d like to make a career out of writing poetry, maybe I’d quit my job as an editor at a literary magazine for a serving position at a restaurant. When I take off the apron, I don’t have to think about the job anymore and can instead focus on poetry. Millennials all over the country are finding ways to do what they love even if it doesn’t make them money.

Niki, Becky’s significant other, is an IT manager in the infectious disease department at Case Western. He gets off work and some nights starts up his Uber app in the hopes of making another 100 bucks.

He also plays in a rock band, Burnin Loins. On Tuesday nights, Niki, Justin and Brent are jamming in a large warehouse space that used to house garment shops and other manufacturing jobs. 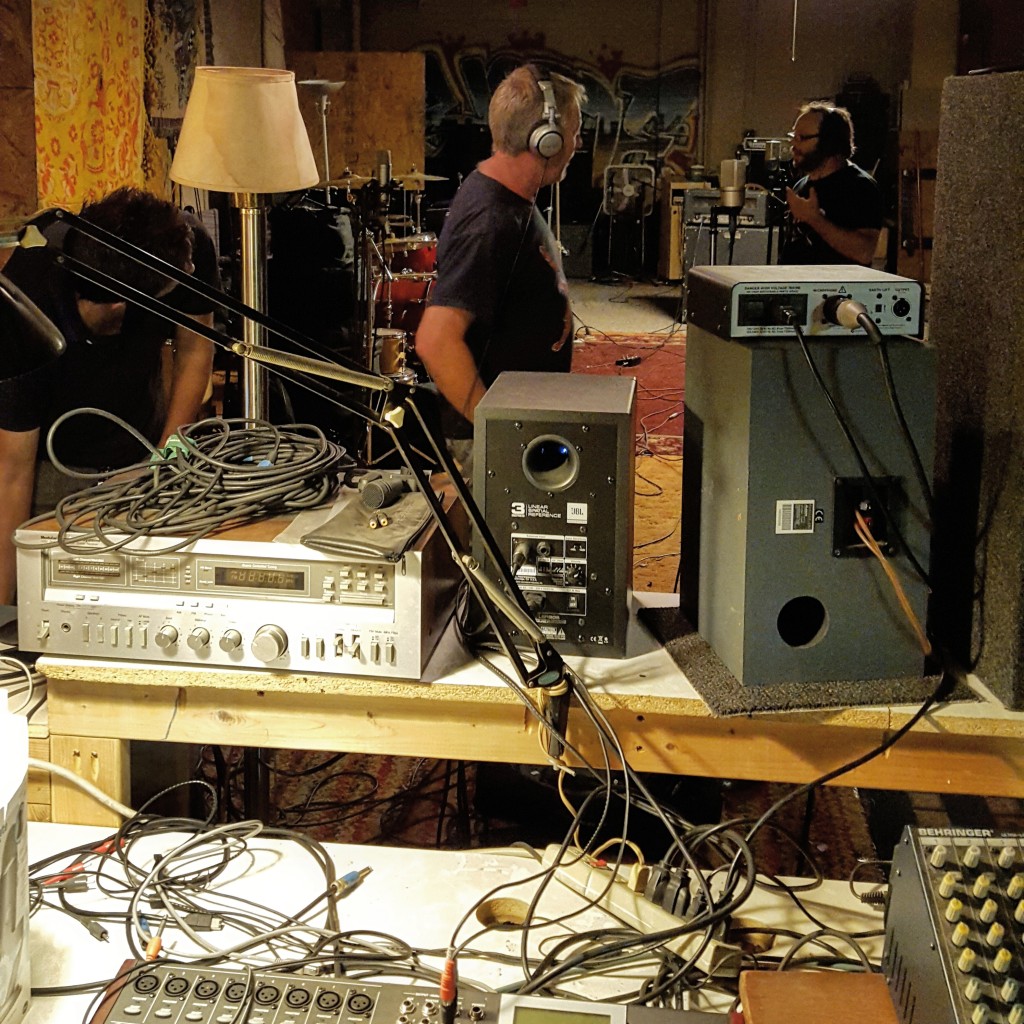 From left to right: Niki, Brent and Justin in the warehouse studio

“You wouldn’t know what goes on in these warehouses,” Becky says, as we both take drags in the green room.

The large abandoned warehouses in the area house a prep school, a brewery, a record press and a ton of artists.

It reminds me of the area where East Williamsburg butts up to Bushwick in Brooklyn.

Justin, bass player and vocals in Burnin Loins, was just finishing a degree in finance as America began reeling from the 2008 financial crisis. The bank he worked for was paying for the education. Justin remembers thinking the tools he was learning about–puts and calls and swaps–were bullshit. And he felt vindicated, as the Great Recession hit stateside.

Around this same time, grant money for urban farming flooded into Cleveland to transform the acres of unutilized land. In 2008, the Gardening for Greenbacks Program was introduced by the city of Cleveland; in 2012, several agri-organizations pledged $135,000 over a three-year period, according to a city of Cleveland report from 2013.

“There was just a lot of abandoned buildings and land that was just being used as neighborhood dumps,” Becky says.

Justin started planting tomatoes and peppers on a piece of land, some acres that the city of Cleveland and a handful of nonprofits told Justin he’d be able to buy for a couple thousand dollars.

One of the factors that’s taken into account when obtaining grant money is high visibility. The plot was on  the corner of west 130th Street and Sprecher Avenue. Interstate Highway 480 emptied out two blocks south of the property.

“I mean it is a good spot for a McDonald’s or a British Petroleum,” Justin says.

When the city came back to collect money for the acres, the price had jumped to $36,000. Justin, who’s also got an ethno-botany (the anthropology of botany) degree uprooted his plants.

But others didn’t. Currently there are about 12 farmers’ markets in Cleveland. According to Justin, there should only be a couple for a city the size of Cleveland, with a population under 400,000. There’s too much competition.

Some of the grants are more about creating odd jobs, building fences around the property for instance, than farming, says Justin.

He’s about the farming. Justin is currently waiting on several pawpaw trees to grow on his land in Lakewood, a suburb of Cleveland. The fruit trees are originally indigenous to South America and hit at his shins.

“They’re hard trees to grow here. I’m expecting to lose some,” he says, which also means he needs to find another way to make money. He pitches Becky on buying a roving trailer to sell his vegan sweet potato donuts with an Ohio maple syrup glaze out of.

Small businesses make up a significant portion of the American economy and are integral parts. Do I need a maple-glazed donut? Most would argue, no. But maybe I do. Maybe that donut, and the world I live in, its relative ease with privilege, allows me to spend more time thinking about the political dichotomy in the States. This then allows me to delve into topics, drinking Rosa Hibiscus Ale bought from The Wine Shop on Lee Road, such as medical research and welfare with the young people building a new America.

Dennis, Niki and Becky’s neighbor, knows firsthand about these subjects and is in a career no one, including Mason, could judge harshly.

Dennis has just gotten a grant to start a research lab for a wearable device that helps people with urinary and bowel incontinence. He’s done successful trials on cats. The device would act as an option to nurses cleaning out the rectum three days a week by hand.

He also does odd jobs. He builds furniture and paints houses for friends and friends of friends in what is actually the sharing economy, without pay.

His excitement and anxiety over getting the grant is perceptible. Dennis is passionate about his area of research and the government’s goals align. But not everyone wants to deal with shit (literally) or more generally work in fields that align with the interests of government agencies, big business or large foundations.

Those of us that do not, tend to get sidelined as less critical to the machine. We should strive to “save the world” and celebrate those who engage in such pursuits. We have automation or the uneducated for the rest.

But equally noble are those who help us preserve ourselves – whether that’s through a song that reminds us of our mother or latte art that not only gives us a jolt of energy but also a smile. Many times the focus of the microeconomy benefits the macro.