It’s easy to pick on Detroit’s urban decay, but there’s a softheartedness towards the blight.

This sentiment brings tourists–more than 275,000 annually, according to the website–to The Heidelberg Project. City native, Tyree Guyton decided to paint colorful polka dots all over a house on Heidelberg Street in east Detroit after coming home from the army and finding his neighborhood in disarray. He then started crucifying stuffed animals to trees and erecting mounds of found object art in the yard. 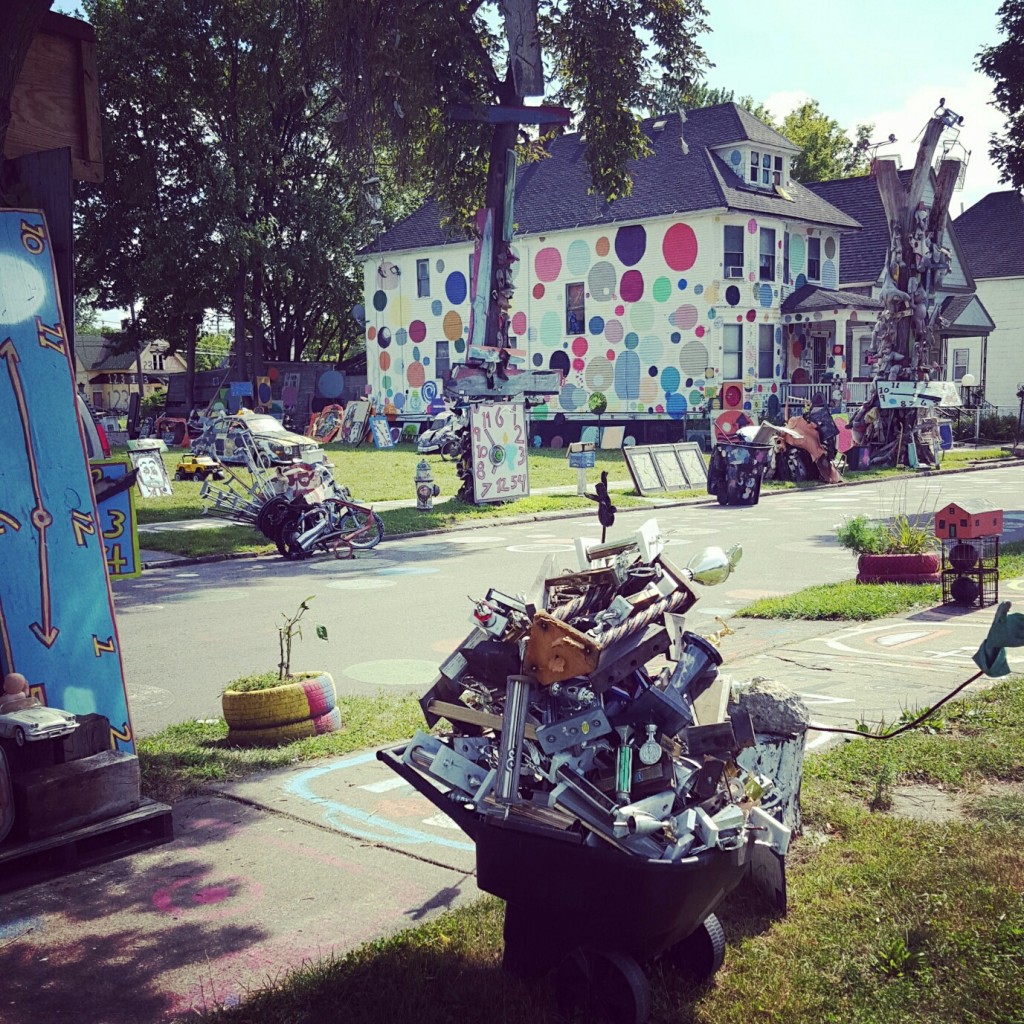 As the mad scientist worked, he garnered media attention. As word traveled about the Tim Burton-esque whimsy, people sheltered from Detroit’s crisis came to leer. More houses were painted, more crippled dolls added to the pile, more discarded shoes hung on a leaning fence. Guyton brings in local artists to build onto the project as well; their go-to medium: trash.

Neighbors watched as traffic increased, and as all great opportunists and entrepreneurs do, decided to use the attention for their own benefit.

At the end of the block, Belle sits on a newly renovated porch behind a yellow house, soliciting a dollar for the chance to write your name on the siding. She collects the money to remodel. My name will soon be painted over.

My dollar’s consumer-facing value, to see my name–unique–on the porch post, will expire. The dollar will then be used to purchase paint; the porch posts will be white with a trim of plum. My dollar still goes towards something visible but it’s impossible to differentiate from mine or Lisa’s or The Cramers. Instead to see value, you must look at the whole, not the individual.

The project, with a mission “to inspire people to appreciate and use artistic expression to enrich their lives and to improve the social and economic health of their greater community,” likely started from a good place. But neighbors who haven’t taken the bait eyeballed visitors. They’re not mean; they’re annoyed that the only way to get people to care about their struggle is to make the neighborhood look more like shit.

The Heidelberg Project has critics, the city for one who thinks the piles are a fire hazard and rat refuge. An unidentified arsonist took several houses in 2013. And early last year, Motor City Muckraker reporter, Steve Neavling wrote a two-part investigative piece on the non-profit’s questionable financials, including spending most of the money raised on salaries (not that I think this is differs from a number of non-profits).

Clockfaces are the most prominent symbolism at the project.

“It reminds us that it’s always time to do something,” says Belle.

It makes me feel uneasy. Sometimes there’s nothing you can do.