Hungover and feeling estranged from my host, I drag my feet into High Desert Brewery in Las Cruces, New Mexico. The fact that only one older guy slouches at the bar while the rest of the patrons sit coupled off at the tables doesn’t give me much confidence, and the brewery’s tagline–“None of our beers suck”–didn’t help.

I order a peach wheat and start reading the paper. I’m choking it down when another man walks up. He’s smiley, every once in a while turning his head in my direction but my eyes are down on the ink.

Somehow a conversation gets started.

“I write about economics and money and people.”

“Really? Well I started that tent city, Camp Hope about five years ago.”

“Yeah, it’s a homeless encampment. You should come over there and see it tomorrow. I’ll be working.”

It’s sometimes hard to believe how lucky I am.

The next afternoon I’m walking in and out of the organized rows of tents, being introduced to weathered men and watching a Latino woman with a young daughter about her legs pulling clothes from a huge pile.

As James said the night before, Camp Hope was established in the fall of 2011 on land owned by the Mesilla Valley Community of Hope, a local non-profit. At that time, the Community of Hope only had temporary permission from the city. Until funding was acquired to build another homeless shelter, they reasoned, tent city was needed.

But funding can be elusive, especially for disdained minority groups.

By March 2012, when the camp was originally scheduled to be disbanded, another shelter had not been erected and the City Council decided the encampment wasn’t such a bad idea. In 2013, the site was rezoned as a permanent campground the Community of Hope could use for other services, such as a soup kitchen and free medical clinic. 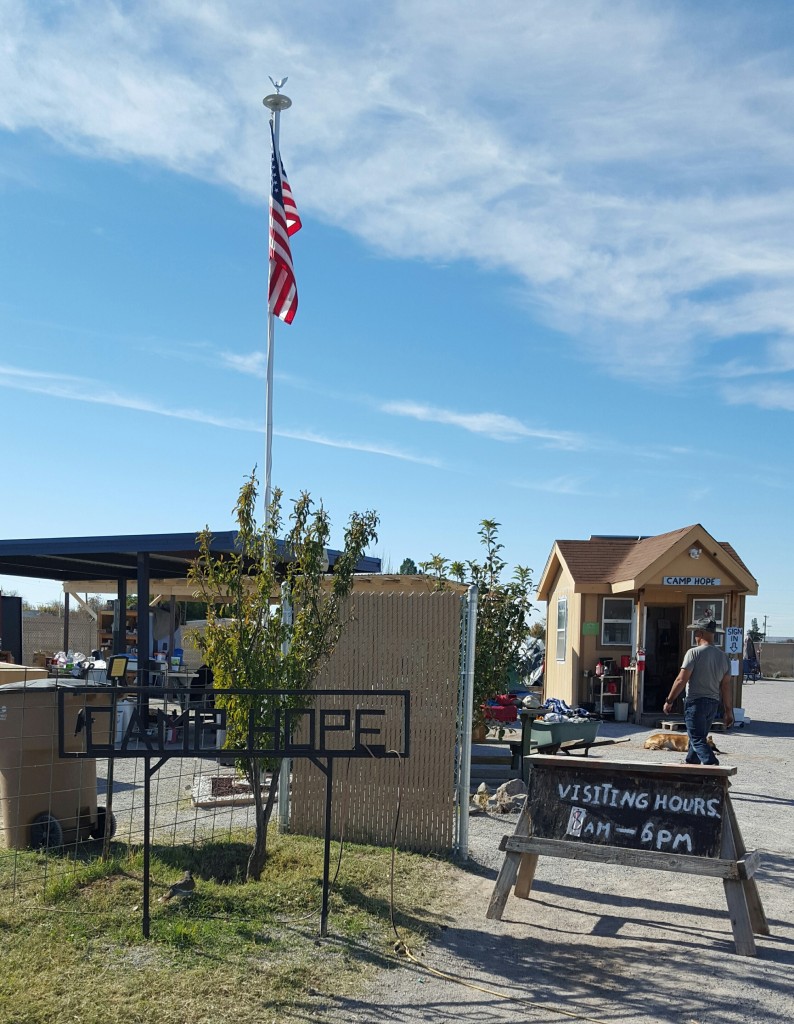 Outside the fenced-in tent city, there’s a long line forming at the soup kitchen. James, who works as a custodian and maintenance man at the facilities, walks me into another building to introduce me to some of the people that run the health clinic. It’s just received $1 million in grant money to remodel and add a behavioral and holistic health component.

“I would say half the people have some sort of mental illness,” says Colleen Morken, a volunteer with the Border Servant Corps. The service sent her to Las Cruces from Louisburg, Minnesota, (population 46) to work at the health clinic.

Many of the people she works with at Camp Hope have depression or anxiety, many times because they’re dehumanized living on the street, Morken says. And more than half suffer with substance abuse. Most the of the time it’s alcohol or spice, what’s been called a synthetic marijuana although it’s effects differ greatly from weed and from spice high to spice high. This makes it dangerous, she says.

Morken not only does triage in the clinic as an EMT, but also hosts outreach events, like the weekly breakfast where she offers anything from needle exchange to HIV screenings to acupuncture to try and lower anxiety to help filling out government or job-related applications.

According to Morken, more than 2,000 people are homeless in Las Cruces.

Currently 35 people live in tents at Camp Hope. It can support 50 people, but Morken says once 40 or more people start living there it gets a bit out of control because it’s self-governed. But during the winter, they’ll fill the place to get people out of the elements.

The community and city government try and work with the encampment as much as possible because they want to see it succeed, Morken says. “Maybe not the government but the community,” she adds.

Although, according to the National Alliance on Mental Health, New Mexico kept its spending on mental health level in 2014 and increased spending in 2015. But tangentially, Mental Health America ranked the mental health of young people around the country and put New Mexico at the bottom with Nevada and Montana.

“I think a lot of times it’s the public response to mental health” that influences government spending on the problem, she says. Some people think “it’s not a big deal; they can pull themselves up by their bootstraps, like it’s all in their head.”

Many people “don’t understand how mental health affects people,” Morken says. And a lot of the issues people that are homeless have can be linked back to a traumatic experience in childhood and are exacerbated by living on the street and being chastised, she says.

For her part, Morken is trying to understand the issue.

She started volunteering at the facility in August and will be around for 50 weeks. Her rent and food is paid for by Border Servant Corps, and she gets $100 monthly stipend for shampoo and other toiletries and fun, like drinks or bowling.

Why help the underserved?

Morken isn’t Catholic, but she went to a Jesuit Catholic University that instilled a service mentality in her. “We are men and women for and with others,” she tells me, quoting the college’s motto.

Morken has a degree in chemistry with a minor in sociology, and before she goes back to start medical school she wanted to participate in direct service for a year to “relate to patients better.”

But it extends beyond that for Morken. She wants to continue working with underserved populations, providing healthcare for the homeless or low income groups, because she’s “young and idealistic.”

“You can do so much more good in a place where people aren’t getting the services they need or deserve,” she says. “You can make a huge difference in their lives.”

“I hope I don’t get over it either and become cynical,” she says.