In October, Ron let his lease lapse and sold most of his stuff. He got on the bike, named Surly Amy in April. On the first day he rode 60 miles, on the second 50. “And that’s when it hit me, I’m free.”

He was headed to Oregon, but got sidetracked riding to family and old friends so he’s been all over Kentucky and Indiana. But he still dreams of heading West, because “these are places where it’s not safe for me to be, if I were talking.” Ron is Left Wing, leaving the racism of the area behind after bunking with an African American in the army who would kindly interrupt his yapping to explain why the way he was thinking was prejudiced.

As we talk, he kicks a nickel towards several pennies on the backyard deck, where he just took down his tent. He’s tight on money. But he won’t pick up the coins. He worked construction before setting off on the bike and can find work building houses nearly anywhere.

“People keep asking me why I want to do this. But it’s not that. I need to do this.”

“You will love Nigeria.”

Not more than a few questions are asked about what a Nigerian is doing in Indianapolis before Mathilda says, “I wish you weren’t going.”

At first, she answers questions directly and meekly. Her and Samuel (another Nigerian, more about him later) talk quietly amongst themselves. They’ll only speak to me if asked a question.

This continues as we walk to the liquor store.

I turn around, “What language are you speaking?”

They glance at each other.

To my credit, Nigerians speak Pidgin English. A pidgin is a simplified version of a language that develops between groups of people that do not speak the same language.

That brought the conversation to Nigeria, in the top five of places I want to live. Mathilda’s passion is palpable. I must go to at least 16 states in Nigeria, all names I cannot pronounce. For nearly an hour, she shows me this soup and that curry. We listen to popular Nigerian musicians, blaring headphones placed over my ears when the right song comes on. We discuss outdated customs, such as the flogging of men before they’re married which–unintended consequence–makes men not marry women in certain regions. Nigeria is wild and in the north, dangerous, but she’s proud of her country.

“You will love Nigeria.”

Mathilda flew into Indianapolis, never being to the U.S. before, on August 4. She’s starting a five-year program in environmental health at the university. She’s alone.

Three days and I’d give my right arm if she needed it. 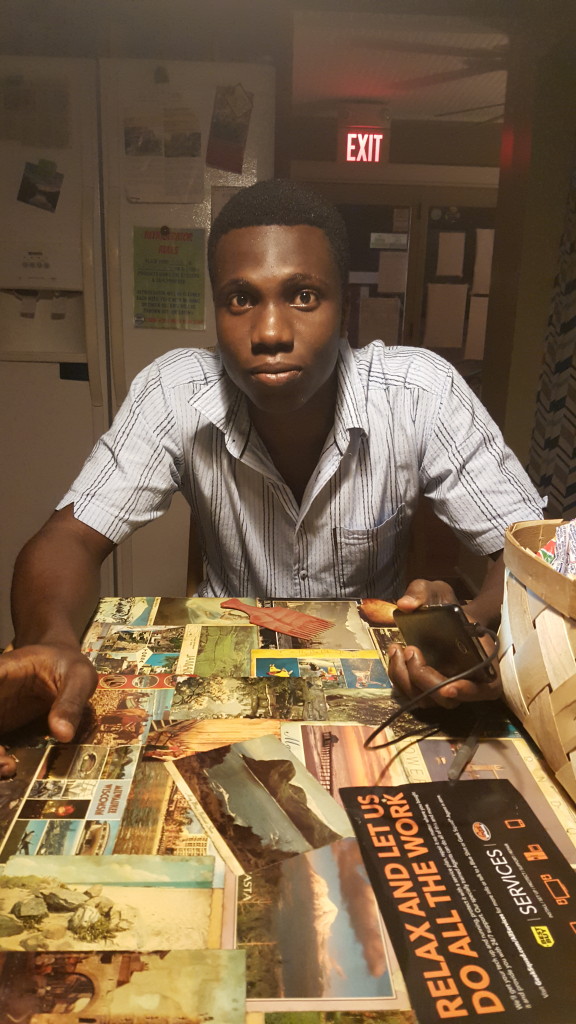 “What are you doing up?

“I wake up early. Are you leaving today?”

The feeling is mutual.

“Samuel” is also going to university in Indianapolis. The night before I ask if Samuel is his Christian name (like Mathilda).

“Nope. I just picked it up at the airport.”

About Nigeria, Samuel tells me to haggle with the merchants over there. Shopkeepers will sell goods for an outrageous markup to tourists. By his tone, he isn’t particularly fond of the practice.

“If they can get away with it, why not?” It’s victim-blaming, prevalent in the States.

After 9 pm these two are always on the porch, taking pulls of whiskey, smoking cigarettes and bullshitting. Chris cuts down trees. Brenden starts at State Farm in a few weeks. Their views vary, but both are fine accepting the other’s opinions.

Brendan: “I usually carry a 32 in my back pocket.”

Brendan: “In case a crackhead comes up to me with an AR and wants to take the money my family and I worked hard for.”

Chris: “If a crackhead has an AR, he’s going to pawn it.”