Bodies are strewn over the grass in Grant Park. Errant appendages fall out from under the shade as bass rumbles in the background. A blonde ragdoll is smiling at the sky while a friend on either side moves her towards the water filling station. Young men in Thompson-esque Hawaiian shirts and flat-bill hats comment on a girl’s ass cheek peeking out of high-waisted shorts.

It was 1:30 in the afternoon. I came in early for my volunteer shift at Lollapalooza, a three-day music festival in the Loop, the central business district in Chicago, Illinois. 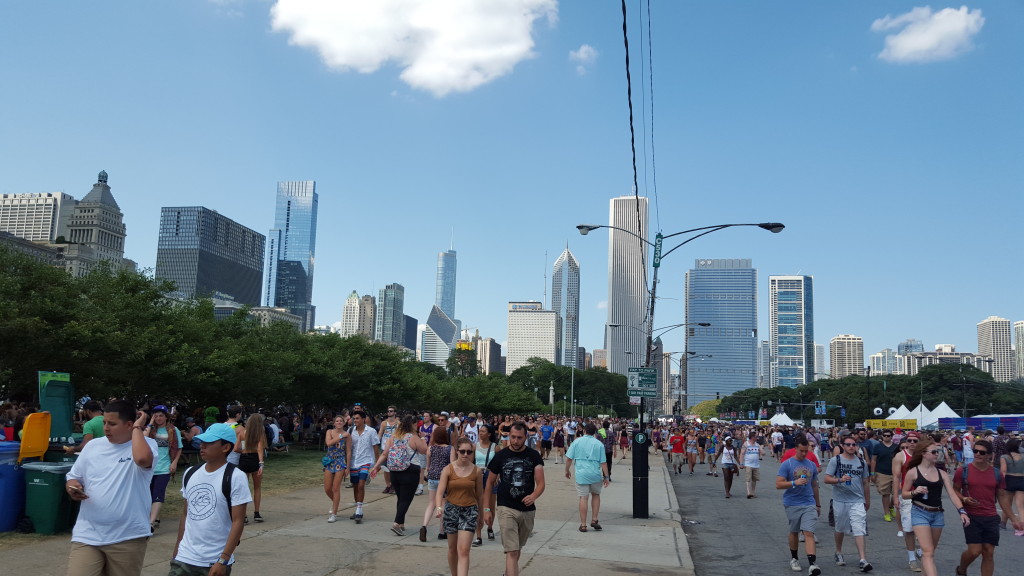 Music festivals are places of worship for subcultures of the population that find solace from disappointed parents and meaningless jobs in music and drugs. But Lolla is a bit different. Because you can’t camp on the property for $30 (like a majority of music festivals) and must fork over at least $200 a night on a hotel room, Lolla has always been a festival for the more affluent.

For three days the flush goers stroll through the Chicago city reality on their way to an illusion, concocted of Red Bull and MDMA. They peruse past dirty fingernails holding bent Chick-Fil-A cups with a thin layer of pennies, nickels and dimes on the bottom. And make it a point to not look the homeless in the eye.

I know we register the inequality, but we’ve become so far removed. And we defend our minutes kept, not pulling change from a clutch with the “American dream”–people with less are not working as hard.

There’s not only a tiredness in their eyes, but a surrender… in knowing that acknowledgment is a currency just as hard to come by.

The displaced that make camp under the Kennedy Expressway were acknowledged last year by alderman, Rey Colon who erected five foot concrete blocks between the bridge’s support beams. With pointed tops, homeless people are unable to sleep on top.

It’s unclear why the alderman thought this made any sense. Instead, ragged clothes are hung over the pointed tops to air out and the blocks like bedroom walls provide privacy for the homeless residents there.

The sidewalk under the bridge has been turned into a group house or sorts. A thin walkway remains, where neighborhood residents can stroll through to their better-fitted homes.

Here too, bodies are strewn. Legs hang out from under blankets covering dirty faces. A dread-headed ragdoll slouches over his outstretched legs. For probably most of his life, he’s dove into peace of mind, fabricated with heroine and small treasures, like the perfectly-shined red apple atop his wire shopping cart.

Four young ladies walk through the “railroad-style apartment,” a man looks up. “How are you beautiful ladies?” I smile, but don’t catch his eyes.

The “American dream” is a hard thing to look in the face.

*Apologies for not getting more pictures; it’s something I’m working on.