My friend has already warned me I’d be sleeping by the snake tank.

But when I walk into her cousin’s house in Omaha, Nebraska, there’s a parrot, uncaged, perched on a tree stand on the other end of the couch. There’s also two dogs, a rescue opossum and three boys who each keep snakes, lizards and tarantulas in their respective rooms.

Katy, the cousin, and I are getting to know each other in the kitchen when her career comes up.

“I work with cadavers at the university,” she says.

The answer catches me so off guard, I basically ask what a cadaver is. She explains that she organizes the shipment of donated cadavers into the university for medical students to dissect.

Cowboys thrust violently on bucking horses on tube TVs above the bar in North Platte, Nebraska. A whiskey and ginger is $2. A group of leather clad compadres are dancing and carrying on.

I laugh out loud because I think it’s a joke. He stares.

You can’t make this shit up.

Flowers is a military veteran in a biker gang (I mean, club, sorry, it’s a club) and says I should come with him to a party next door. But first I must meet his friends, out back, smoking.

The door opens into the chilly western Nebraska air where one of the women is grinding against one of the men.

“This is my brother,” she says about her partner.

Before I get an answer, Flowers is telling me that they’re all here from out of town, that they’re here to host an event for male strippers. The woman moves to me, grinding low and shaking her head around as if she’s motorboating my crouch.

My stomach tenses. I will go to that party but now my mind is wandering to being drugged and raped.

It takes awhile to herd the group next door, although a lot of the holdup is me trying to pull cash from an empty ATM. The price of a whiskey-ginger has gone up $1 since the cigarette.

But Flowers pays and we take ten steps to the clubhouse next door. The place is packed with white men, wearing beards, bandanas and blue jeans.

Outside, I get to talking to a weathered-looking guy called “Whatshisname.”

“This is the craziest economy. They spend a whole bunch of time hiring you and training you up, and then the rest of the time they spend trying to fire you,” he says.

“Wait are you seriously male strippers?” I ask.

“Oh dear girl. I lie about everything,” says Flowers.

Whatshisname works for the railroad.

I’m glad I wore my red leather jacket tonight, but it’s not keeping out the cold, so I step inside into the warmth brought on by a heater, or is it just the hot air?

One of the guys grabs me a beer as several others crowd around to hear why a girl they’ve never seen before is in the clubhouse.

“We might act like a bunch of hoodlums but you’re safer here than anywhere,” says 6-Point. I’m still unsure if that’s a sound assumption, because while we’re there a younger guy with brown skin and without leather gets thrown out of the club, his girlfriend trailing behind.

“He said he was an affiliate, but he ain’t no affiliate.” Affiliate is what they call people that support the troops but aren’t military vets themselves.

“Yeah but you’re with me,” says a man who’s only facial hair is a long reddish strip hanging down from the center of his chin.

Another man is standing uncomfortably close, then hands me a mason jar that smells like high-powered solvent. Unflavored moonshine. My biggest advantage is knowing I can drink many of these guys under the table.

I swig and cringe. Nope, that might actually be nail polish remover.

I move back over to 6-Point, because I have to ask about services offered to returning vets. To me, it seems there’s tons of services offered both publicly and privately to vets, but many of them are not taken advantage of, including the limited mental health support provided.

“It’s true,” he says. “You gotta understand these are tough guys. They’ve seen a lot of shit. And they aren’t the kind of guys that ask for handouts or want to seem weak.”

I ask him if I can write that down, and he says yes, but as soon as I pull out my phone, several other guys walk over and they’re looking over my shoulder.

“Are you going to write a story about us?”

The question seethes of foreboding. For as brazen as these folks seem, it’s as if they’re worried that they might come off sounding like assholes. It’s as if a little piece of them knows what they’re saying is offensive and ignorant and that the sentiments don’t align with what the majority of Americans see as acceptable.

Which is why I have to keep pretending I need to pee. I lock myself in the bathroom, sitting on the toilet, listening to the ruckus outside and taking notes. And my notes are short-hand, so without seeing the complete story, they could be taken out of context.

A quiet redhead starts asking me about my literary inspirations, which is interrupted by several of the brothers that want to go to a bar with a dance floor down the road.

“My favorite author is E. E. Cummings,” he says as I get dragged towards the door.

Redbeard jumps in the Escape with me, and as we skid into the gravel parking lot of the bar says, “If you made out with me, you’d wanna take me home.”

We walk into the bar like we fucking own the place. There’s no niceties and no IDs necessary when you walk in with bikers.

We both get a drink and lean against the bar away from the others.

“I am more on the conservative side,” he says. “I don’t care if two gay people or lesbians want to marry. If you wanna go marry a woman, that doesn’t affect me. I don’t care if a woman wants to get an abortion. That’s her choice.”

Is he confused about his political affiliation?

“Wearing a hijab isn’t their preference.” “They’re not a peaceful religion.” “They want to take over this country and make sure I wear a hijab.”

But, unlike many of the other vets that did time in the Middle East, he doesn’t wear an infidel patch because he understands the word infidel is quite broad, meaning anyone that doesn’t believe in the religion you ascribe to. So before ISIS began calling Western society infidels, Christians actually called Jews and Muslims infidels and used that label to condone the Crusades.

“Look, I’m pretty reasonable,” he says. “If two gay guys walk in here and sit at the bar to have a drink and don’t start shit, I’m not going to start shit.”

“But if two Muslims walk in here and start talking shit, we’ve got a problem.”

“I see your point,” he concludes, looking up as in thought. “I did change the story. But that’s just how I feel.”

An image of me as some Secretary of Something to the President flashes across my mind, the headlines read “Reutzel Ends Racism Among Nationalist Military Vets.”

I smile and make another bathroom run to take notes.

Later, back at the clubhouse I’m sitting, eating Doritos by the less aggressive 6-Point. He pulls a coin emblazoned with Iraqi Freedom out of his pocket and sets it in front on me.

“Was it for Iraqi freedom?” I ask.

“Oh, it doesn’t matter. I went because I was told to go.”

I’m following Katy into the basement lab of the university where students bustle about “studying” for finals.

‘Will I faint upon seeing a face? Or worse yet, vomit? Will this be life-changing? They say, seeing a dead body changes a man. Don’t they? Who is they?’

There’s a face, detached from the bones and muscles underneath, that used to smile and frown, tell jokes and stories. There’s a brain, sitting idly inside the skull cap. 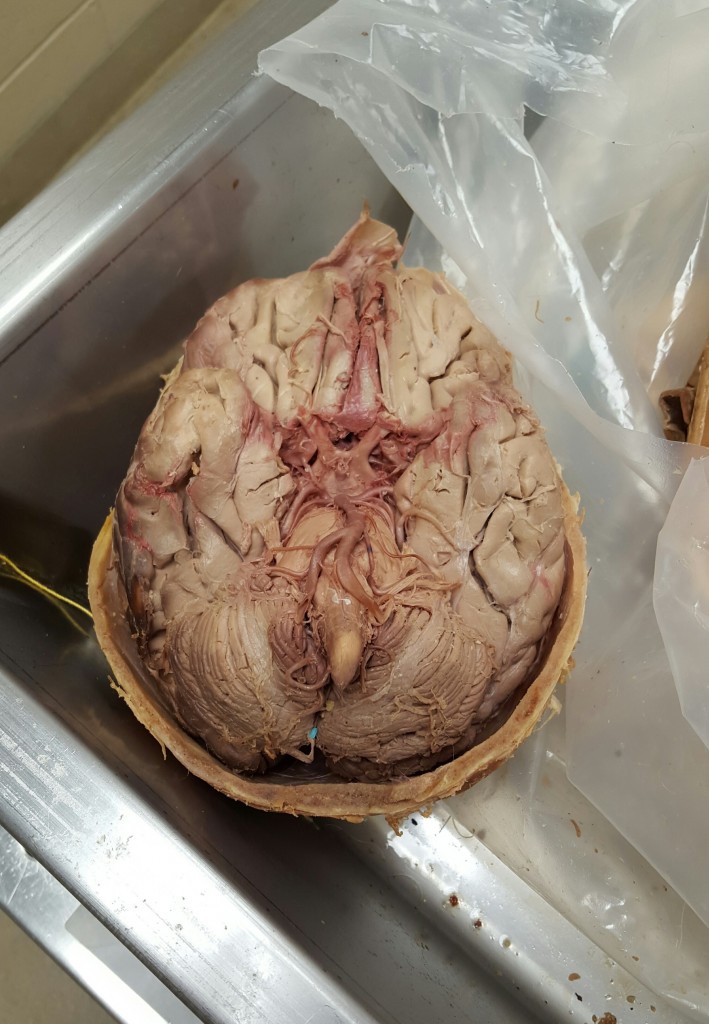 It seems strange that there isn’t movement at all. That’s a brain that once pulsed excitedly to take in new information from its surroundings and manufacture love and hate, political ideologies, religious conviction and any number of thoughts.

And I’m seeing it in the name of science. I’m reading the names–Michael, Barbara, Jack–and causes of death–lung cancer, organ failure, heart disease–on laminated cards, knowing these people chose to be here, cut open and exposed for the good of many others.

I think about the war, of moving with purpose along dusty streets trying to outrun the quick steps of gun fire, of looking down to see the brown eyes of a stranger, a brain that no longer pulses excitedly. Nameless, cause of death–obvious–cut open and exposed for the good of a few.

It’s 4 am and I roll down the window because Redbeard is walking back over to the Escape.

“I just think you need to experience this,” he says as he leans in.

He was wrong. I don’t want to take him home after making out with him, but I’m unsure if it’s the kiss or his ideas on the world. I understand them.

When your first experience overseas is being shot at, when your first encounter with Muslims is an extremist group trying to kill you, it puts a bad taste in your mouth.

I can taste it. It’s bitter and hard to wash out.