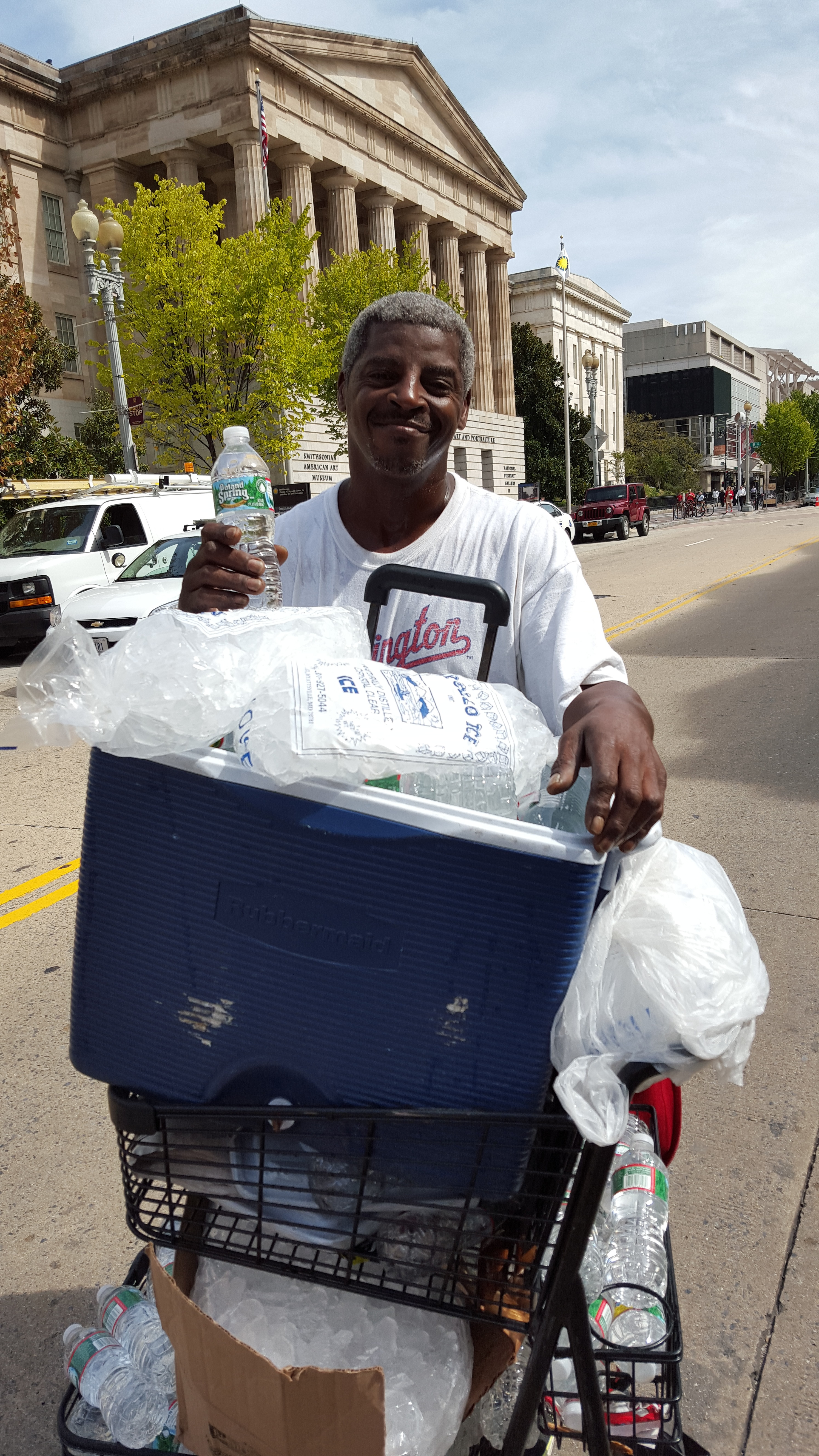 “I ain’t with the pope; I’m here for the dollar,” Penter shouts. I try to keep stride with the eager middle-aged man as he pushes a shopping cart overflowing with bottled water and bags of ice towards a street lined with people waiting for the pope to drive by.

I had just helped him load five cases of Poland Spring onto his cart outside the doors of a CVS where he had purchased the supplies. My job became catching fly-away pieces of plastic as Penter ripped open the cases and wrangling bottles rolling down the street that Penter had knocked over in a rush.

He was grumbling about the cashiers giving him a hard time for talking about God, when an employee walked out to look down on us.

“Do you know your cooler is leaking?” she asked.

Penter didn’t respond. He’s was bent over, frantically rearranging his wares. She asked again. I spoke up, “Yes.” She stared. I stared. She walked back inside.

Penter’s existence hinges on the prefix re-. Reselling, reusing, recycling and the affluent’s disregard for preparedness because convenience is something they can buy.

I was walking back to the Metro Central station in Washington, D.C. after hearing Pope Francis incite solidarity and compassion as solutions to climate change, immigration, the cycle of poverty, really everything, when I ran into Penter, luckily before he sold out. The Capitol was only a couple blocks away and every other person of the thousands walking back to public transportation or cars in garages was buying.

Pope Francis is a popular and controversial mouthpiece for the Catholic church. He’s been an outspoken critic of America’s current version of capitalism, which debases people like Penter.

“[Pope Francis] denounces our beloved trickle-down economics in the same breath that he refuses to reduce abortion to simply one more personal choice; each manifests what he calls a ‘throw-away culture, the definition of which overlaps considerably with U.S. culture as such,” says Nathan Schneider, a journalist and author who covers religion and political movements, in The Nation.

In D.C., Pope Francis calls for the creation and redistribution of wealth, the correct use of natural resources, the proper application of technology and harnessing the spirit of enterprise.

At the capitalist nation’s Capitol, he doesn’t go as far as he did in Bolivia where he called the idolatry of money, “the dung of the devil,” instead padding his blows. For instance, on American’s unsympathetic view of immigrants, he muffled the attack saying “the U.S. isn’t fearful of foreigners… most of you were once foreigners… most of you are descendants of immigrants.”

He knows how to talk to Americans. After every attack, an endorsement; at one point he calls the United States a courageous leader.

We were. We were a country built on exploration, risk-taking and acceptance.

Hearsay and sensationalism have since persuaded us to fear other men that pursue happiness, as if there’s not enough to go around.

While most T.V. news stations survive on “if it bleeds, it leads,” I have personally watched Fox News steal good people’s empathy and humility. The downtrodden–rape victims, hustlers, the homeless, those on the dole, refugees–are all assailants.

Penter is one of these adversaries.

The North Carolina native moved to Washington, D.C. and laid concrete for 18 years. After a couple injuries, he was laid off and started taking unemployment. This safety net eventually ran out and he got evicted. Penter lived on the streets for some time, where I assume he picked up the crack habit he’s been clean from for 18 months.

He’s one of the lucky homeless residents that got picked up by Pathways to Housing DC, a homeless outreach program. The group pays Penter’s $1,200 per month rent and offers mental and physical health services as well as addiction treatment. Penter also receives food stamps.

“This is my side hustle,” he says, wiping sweat off his forehead with a sweat-soaked shirt. “I do this to get me, you know, cigarettes, a couple beers, to take pretty ladies, like yourself, out to the movies. I do this for me. I like going to movies, you know. I like going out and doing stuff just like all these tourists.”

Police give him trouble sometimes, justifying hassling a man trying to make a buck to protect multi-billion dollar corporations, like CVS.

Incorporated in Delaware, CVS has an ample rap sheet, including a deceptive business practices case from 2008 in which the pharmacy chain paid out $38.5 million. CVS Caremark was advising physicians to switch their patients to brand-name prescription drugs so they could save money. In reality it led to very little savings and sometimes increased cost for patients and physicians, but boosted CVS Caremark’s profits. The $38.5 million payout represents 0.0003% of CVS Caremark’s estimated $117 billion worth.

Law enforcement, corporate employees and everyday citizens continue to hold an unspoken double standard, defending institutions when they exploit individuals yet harassing individuals when they undermine corporate profits. In the process, we customarily give the powerful a pass, and kick the lowly while they’re down.

Pope Francis gets respect because he doesn’t just stand for the opposite, he washes and kisses the feet of prisoners, he decides to live in the Vatican guesthouse instead of the Apostolic Palace, he eats with the poor in D.C., slagging off lunch with politicians. 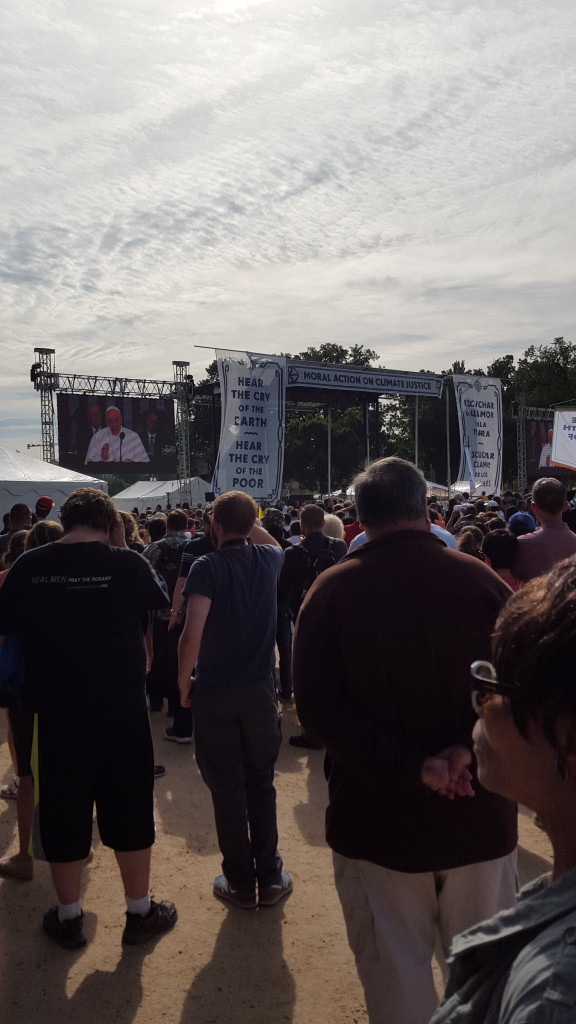 The politics of Pope Francis may be wrapped in politeness, but that hasn’t stopped him from being recognized as an agent of change. Even U.S. presidential hopefuls like Democrat Bernie Sanders are seizing his rhetoric, seeking to enact the change he champions.

“Pope Francis is not just asking us to alleviate poverty and move toward more a equitable distribution of wealth and income. Nor is he simply requesting that we act boldly to combat climate change and save the planet,” Sanders says. “He is asking us to create a new form of society where the economy works for all, and not just the wealthy and the powerful. He is asking us to become a different kind of person, where our happiness and well-being comes from serving others and being part of the human community – not by spending our lives accumulating more and more wealth and power while oppressing others.”

The pope and Sanders argue for a civil economy, one that not only fosters the creation of wealth, but also the creation of self-governing alternative economies based on values. They believe a cooperative is the middle ground between socialism and individualism which can grow an altruistic spirit.

And no one acts that way more, whether they know it or not, than those whose happiness teeters on pre-determined compromises: sheltered or homeless, life or death.

“I won’t cuss them,” Penter says, referencing the CVS employees that gave him a hard time. “Because I need them.”