Who understands war? Our forefathers might be the only ones, holding muskets in trembling fingers at a target only a few hundred yards away. Explosions, blood, panic.

I can sense it as I walk through an interactive tunnel in the Naval and Maritime Museum at Patriot’s Point in Charleston, South Carolina. As I walk through stepping on squares, panels on the wall light up showing various black and white photos of tanks and fighter jets. It’s accompanied by the sounds; the sounds are the worst.

A veteran with post-traumatic stress disorder wouldn’t fair well in the tunnel. I’m hardly holding up…

The sound of war isn’t natural. It’s the sound of metal and technology and machines, and in that way it’s stressful.

Why do we think this is good? Why do we talk about war as if it’s something brave and heroic? 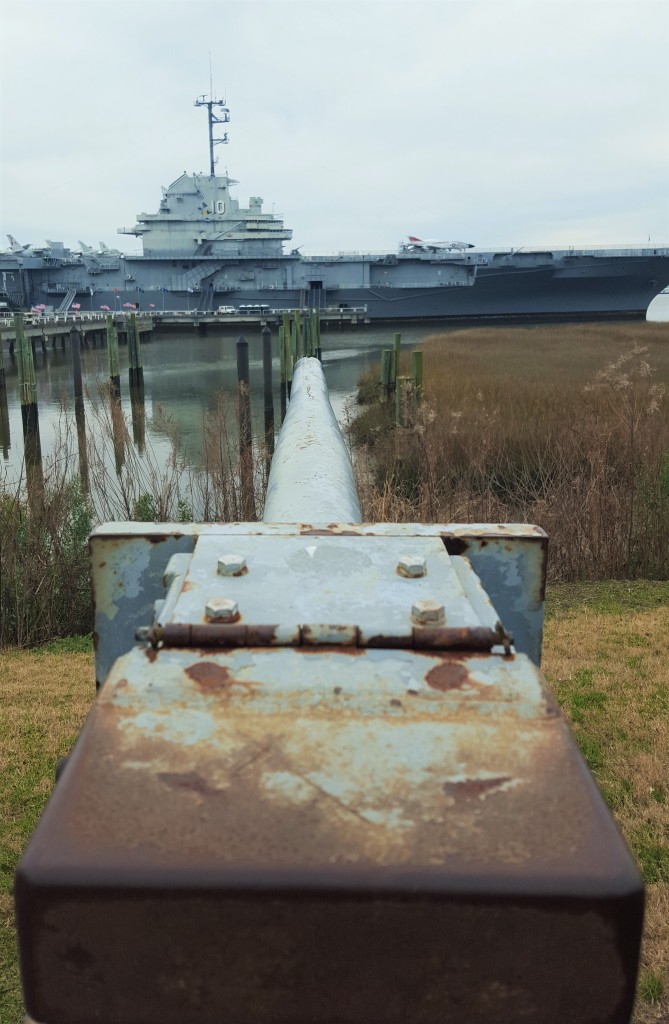 I walk farther. In another section, there are old Life Magazines with portraits of soldiers that had been awarded the Medal of Honor on the cover. The sentiment on war has changed drastically in the United States; large swaths of the population protest and disengage with the political system because of the country’s wars.

It’s split, though. There are some that still see war as a defensive measure and noble.

But war today isn’t noble or brave. We fight wars with drones that we fly over people’s homes from the comfort of ours. We push buttons on control panels like the red A or the blue B of game controllers without seeing the blood and destruction it causes.

Outside Midtown Bar and Grill which caters to young college students with $8 bottomless shit draft beer, Dezmon strikes up a conversation while I’m smoking. A young military personnel is exactly what I’m looking for, and I try to pad the question but it comes out pretty blunt.

“Why would you ever choose to be in the military?”

“It’s a paycheck,” he says initially.

Dezmon was going to be in the Air Force, “but then you have to shoot people,” he says. So he decided instead on the Navy because “yeah, I shot missiles but I didn’t know who I was killing.”

That camouflage, that obscuring of the realities of war, isn’t positive. I’m an optimist in that I think as humans evolve, we’ll become more open-minded, more peaceful, but maybe I’m just out of touch. We’ll continue fighting and it’ll be that much easier because we have no blood on our hands. It’ll be just like playing a video game.

Dubstep music thumps from loudspeakers behind a DJ. How fitting, the sound of machines. College-aged men offer sloppy young women shots as they spill drinks bouncing around the dance floor. It smells like stale liquor and the sweat of animals in heat. I doubt these people are much younger than I am, so why do I feel so removed? I have better things to do than pretend like life is a fucking party.

I sit down with a Budweiser at an empty booth, away from crowd. A 25-year-old man sits down opposite and asks why I’m sitting alone.

I’m in no mood to talk, but he persists. I tell him I write about politics and he, a second generation Venezuelan, tells me he’s a Trump supporter. The sound of indoctrination.

“I bet you support Bernie Sanders,” he says. “You’re young and have a nose ring and I bet if I asked you, you’d say you’re spiritual.”

I start taking notes on my phone and he gets offended because I’m not paying attention to him.

“You should come back to my place.”

“That’s not going to happen.”

He scoffs. I just stare, waiting for him to move out of my way. Then he tries the pout.

I do something then, a learned behavior, indoctrination.

See, for a woman, it’s many times easier to get your way by being nice and apologetic for your disinterest in sleeping with someone that stands for everything repulsive.

Again: “Can I get a pic to save as your contact?”

It makes me feel nauseous as I walk home, not the lie, the bending over to let a pompous asshole feel better about himself.

I can change that.

“What the hell are you talking about? Who is this?”

“You just met me downtown.”

Why did I still apologize?

Why are we still thanking killers?

I don’t hold them altogether accountable, the privileged or the patriot. But maybe we should stop appeasing them.

The John F. Kennedy quote that greets me on the way into the museum comes to mind: