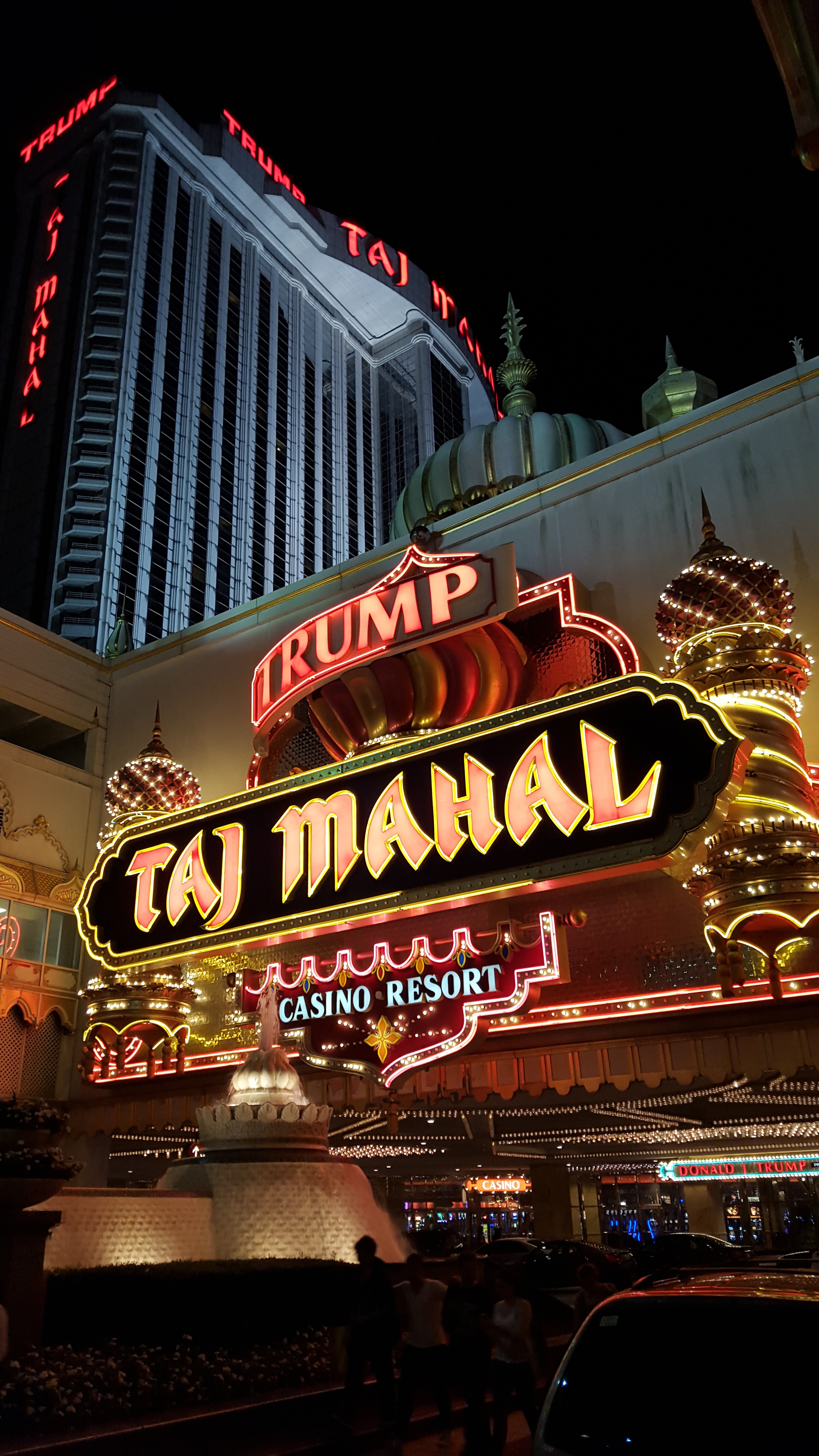 Pop music plays over the speakers and a perpetual ping, like when someone is sarcastically excited, blurts from slot machines. The mix sounds like carnival music.

Old gamblers fuse with the chairs in front of the slots, hunched, tapping buttons with a predictable rhythm. Young adults prance around poker tables hoping to get lucky with only $100.

Gambling isn’t my vice, but drinking is, so I’m here at the Taj Mahal, an Atlantic City casino with just enough Indian flare on its exterior to get away with the name. 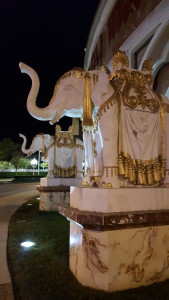 This particular casino is the braggadocio of Donald J. Trump, who I can’t seem to stay away from and whose mug is on most of the TVs hanging above the bar, because tonight is CNN’s Republican presidential debate.

Surreal is an understatement, especially knowing the troubles Atlantic City has faced over the past couple years. Four of 12 casinos, including Trump Plaza, closed in 2014, in what many said was a culling of competition in a city that can’t support a double-digit number of gaming houses. But that culling also left more than 8,000 people unemployed, aggravating the already prevalent homelessness in the city.

I order a whiskey and ginger and settle in for the next few hours of debates.

Trump and Carly Fiorina, who led Hewlett Packard during the tech recession of the late 1990s, early 2000s, argue about who is a better business person. Fiorina dodges questions about being forced to leave the company, attempting to paint herself a challenger of the status quo.

I like rebels, but then I remember she also fired more than 30,000 employees, only to hire more people, some outside the U.S. Apologies Fiorina, using cheap labor overseas to cut costs is the status quo.

“[Viewers] could care less about your careers, they care about theirs. You’re both successful people, congratulations. You know who’s not successful? The middle class.”

Christie gets a +1. The middle class is being systematically wiped from this country, as confirmed by numerous stats, including the 66% of income growth that went to the top 1% between 2001 and 2007 or how 61% of Americans “always or usually” live paycheck to paycheck.

So far, this hasn’t given me a permanent grimace.

Although that could change pretty quickly based on my new reality, a group of suitors vying for my attention that are at times worse than the Republican party. Like winged insects drawn to a light, the men of Atlantic City, it seems, can’t resist a make-uped woman sitting at a bar alone.

I fist-bump Jeff, a libertarian, after he tells the bartender he most respects Bernie Sanders for not waffling, but now he’s stealing my attention from Mike Huckabee, a former Arkansas Governor, Fox News pundit and Christian minister who supports Kim Davis’ refusal to issue same-sex marriage licenses.

Mike’s talking about FairTax, a national sales tax that would replace all other taxes. It’s interesting in principle, as it would seem to incentivize productivity, though in practice it’s probably unrealistic–think discouraging spending and underground markets.

“Every guy thinks you did that especially for them,” Jeff says, referring to a woman’s decision to wear a dress.

Meanwhile, Trump is claiming he’s “the most militaristic person” anyone will ever meet, and while conservatives chest-pounding riles me up, nothing makes me more livid than the patriarchy, and men using the patriarchy to chase tail.

“It’s so bad,” he says. “They don’t understand that a woman is doing that for herself.”

I nod approvingly, like he wants me to, reassuring him that I acknowledge he’s one of the “good guys.” I don’t tell him to fuck off, I’m on a tight budget and he’s offered to buy me a drink.

“They used it at the wrong point, and I said there will be a total imbalance of the Middle East, Iran will take over Iraq, lots of bad people, like ISIS, will take over the oil, and that’s exactly what happened,” Trump says. Why is he sounding so coherent?

Another coherent, yet far more calm candidate, Rand Paul, the Libertarian-leaning Senator representing Kentucky, talks about the War on Drugs. “We need more rehabilitation and less incarceration,” he says.

I’ll have another, both potion and a prince.

Prince, a pimp, interrupts my thoughts on Wisconsin Governor, Scott Walker, who is opposed to raising the minimum wage. Walker remarks that the best way to raise people’s salaries is to give them a better education so they can get jobs that pay way more than minimum wage from the start.

It’s bullshit economics. I’m a believer that education is key, sure, but the U.S. is already dealing with the unfavorable implications of Walker’s thinking. Today, many college graduates are unable to find jobs that fit their degrees, so they take jobs in restaurants and retailers, crowding out those lower-income individuals that depend on those jobs to survive.

And sometimes that pushes people into alternatives like selling drugs or sex.

Prince is making his case I should join the business. “Without larceny you could save $1,500 a day, and that opens a lot of goddamn doors,” he says.

Christie is rebutting Trump on the Middle East. “What those people wanted, what they deserved{,} was for America to answer back,” he says.

Exactly the reason important decisions–like the lives of hundreds of thousands of Middle Easterners, the lives of tens of thousands of American servicemen and women and the more than 200,000 American veterans that have been diagnosed with PTSD–should not be made when bereaved and angry, because they tend to be irrational.

“You just gotta give me 26 days,” Prince continues.

I decline, following my own advice to Christie.

Fiorina is talking about burying a child due to drug addiction now.

“So we must invest more in the treatment of drugs. I agree with Senator Paul about states rights but we are misleading young people when we say that marijuana is like having a beer, and the marijuana that kids are smoking today is not the same as what Jeb Bush smoked 40 years ago,” she says.

Because once you smoke weed, you need something stronger… like a whole bag of Lays. I’m wondering where I might be able to find some right now to soak up some of the whiskey.

“America is the greatest country in the world,” he says, talking of opportunity, of making it, of the American Dream. It pains me to have to write this, knowing it inflates the heads of nationalists across the United States.

I wonder if Romi is talking about the same country, the one where you can make appalling, slanderous remarks on the murder of innocent people.

The scary thing about the statement are the undertones of reality, for example the “retribution” killings of women in Isla Vista, California. And the Republicans seem fine continuing to stoke the fires.

Romi was a Republican before George W. Bush, but “that man was a joke.” To him, the whole Republican party has become a joke. They care more about flapping their jaws about building a wall across the Mexican border, than they do about the rising inequality on the state-named streets of Atlantic City.

Maybe this is part of the problem: America has heard how great it is for so many years, we’ve come to think we shouldn’t change. We’re the most powerful; we know best.

“Everyone has their problems.” Romi says.

Ours in the U.S. is stepping down from the top spot gracefully, it’s the ability to accept our faults, to apologize, to take advice, to compromise.

Formerly we stood for freedom, for liberty in all things, for everyone’s pursuit of happiness, we were allowed to take some moral high ground because we accepted the melting pot around us.That’s what made us great.

So get your head out of your ass, America.

After Jeff makes a joke about drugging my drink, I take my own advice and leave the bar.