I’m Googling cheap massages in a parking lot in Fayetteville, Arkansas, when I look up to find myself outside the co-op grocery store, Ozark Natural Food. What’s a co-op doing so close to Walmart’s turf of Bentonville?

Spencer, a store associate at the co-op, wonders the same thing.

“There’s definitely a Walmart culture here in Arkansas,” he says. “People don’t care where they get their food or how it’s made; they just walk into Walmart because they want the cheapest thing.”

He’s chipper and more than happy to talk about the benefits of the co-op and his job there, something I just haven’t seen from Walmart sales associates across the country. But then again, when the company that employs you makes it a point to pay you minimum wage or below that tends to affect loyalty.

“Our staff is very engaged at their job,” says Andrew Levoir, a marketing assistant at the co-op. “Many of us choose to be here because we believe in the cooperative model.”

Plus, Ozark Natural Foods offers full-time staff health care with dental and vision, vacation and sick days and free food. Who doesn’t like free food? The co-op gives its employees first access to expired (but still good) food for no charge.

And it’s not just cooperative, it’s also local and non-profit.

While Walmart puts a significant amount of money into philanthropy projects, such as Fighting Hunger Together and Global Women’s Economic Empowerment Initiative, the retailer’s bad behavior in terms of employee rights is particularly thorny since it’s an institution that embodies the American dream. And its museum in Bentonville lauds the company’s commitment to community and employees.

A sign with a quote from Walmart founder, Sam Walton welcomes visitors to the museum: “Ours is a story about the kinds of traditional principles that made America great in the first place. It’s a story about entrepreneurship and risk and hard work and knowing where you want to go and being willing to do what it takes to get there.”

America is definitely the place risk pays off. America’s recasting of its racist Manifest Destiny policy into a tale of entrepreneurship and exploration is one of the great examples of historical revisionism. And it’s enticed swaths of immigrants to our borders, to open jewelry and clothing stores, falafel shops and nail salons.

Throughout the Walmart museum, Sam Walton is presented as a humble man whose goal was to reduce the cost of living for everyone, and who credited the staff for making that happen.

Many people in Arkansas see Walmart as a friendly, local shop. There was a throwback feel to the ice cream shop you exit the museum through and the white-haired staff in the gift shop beamed with pride that someone from outside the state took interest in it’s heritage.

Walmart’s mom-and-pop aesthetic allows the global enterprise to seem less aggressive and odious. It fits in well with the cult of small business, as Jules Bentley so thoroughly nailed it in a piece for alternative New Orleans culture magazine, Antigravity:

“The cult of small business, much like the newer piecework ‘sharing economy,’ attempts to make capitalism appear kinder and gentler by pretending to reward personal initiative. The Uber driver or small business owner are told they are masters of their own destiny, that they are in control of their income. This is how, to quote the sportswriter Scott Leedy, ‘the techniques of power disappear from view and appear, instead, in the form of self-discipline and individual responsibility. The goal of the institution is to produce a subject who welcomes the increasing demands.'”

George H. W. Bush didn’t see it that way, though, giving Sam Walton the Presidential Medal of Freedom in 1992, saying Walmart is the epitome of the American dream.

Right before exiting the museum, Sam Walton’s old pickup truck and a plaque with a quote from the man himself stands as a reminder of his down-to-earth attitude.

“I just don’t believe a big, showy lifestyle is appropriate. Why do I drive a pickup truck? What am I supposed to haul my dogs around in, a Rolls Royce?” 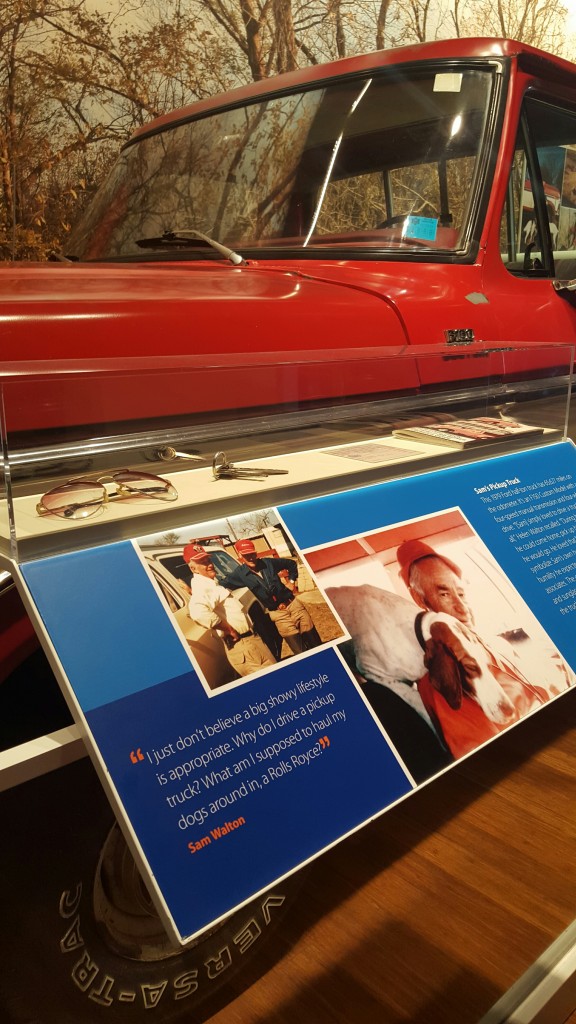 We’ve learned this lesson before America.

It’s the same folksy appearance George W. Bush embodied with his mispronunciation of nuclear into nucular and his sometimes Yogi Berra-esque nonsense. And that appearance, whether exhibited by a large corporate or a wealthy politician make those institutions seem less evil.

While Walmart has made changes–most recently the big-box retailer announced that more than one million sales associates would receive pay increases this year–this perhaps shows that grassroots efforts like co-op programs are vital to keeping capitalism in check.

The co-op movement, which started in the US in the 70s, was a rejection of consumerism-caused greed and the never ending ladder to the top whether that means stepping on heads or not.

“For co-op people, they were more wanting to work together instead of against each other in competition,” Levoir says.

In the cooperative movement, people work together to work against. While this could seem contrary to the collaborative nature of these movements, being opposed creates impassioned people and is at times a stronger force to bring people together than their harmonies.

For the future, cooperation is a better way forward as it balances arguments and opens our eyes to new ways of working towards a goal. But it’ll be a challenge to advance, living with the consequences of our past decisions, whether that’s Bush or Walmart.