“Why’d you come here,” the bartender asks as she pours a bottle of Budweiser into a cold mug.

She’s a middle-aged white woman with blonde, immobile waves and rhinestone crosses on the ass pockets of her jeans. The restaurant and bar (one of two in Camden, Alabama that isn’t a fast food chain) is filled with white people. The older ones throw the glances of regulars and a table of camouflage-wearing young adults sit behind me talking about their kills.

“Well I write about economics and Wilcox County is the fifth poorest county in the country. I figured I could find something interesting here.”

It’s not the kind of thing townspeople want to be known for, especially ones wearing rhinestones. The uncomfortable look she gives makes me regret saying it, although it starts up the conversation pretty fast.

“Well we’re the most well-off poor county out there,” she says, pointing to the lack of homeless people on the streets and the huge southern-style houses I had already noticed driving in.

There’s a blasé tolerance in the answer that’s refreshing, as if she understands that in a country full of diverse people that all have different experiences. Sometimes shit happens.

“There are those that work and those on welfare. And it’s all blacks,” she says.

I sense this is going to get a bit racist by that sensationalism, although in an area that’s population is predominantly black–African Americans make up 73% of Wilcox County–it’s likely the majority of people on welfare are also black. That’s just good deduction.

It’s a learned behavior from their mothers, she says. Culturally black people are so different than white people, she adds. Sure, I think, African Americans actually built this country after we brought  them here as slaves. But, that’s not the cultural difference she’s talking about.

“If you’re a boy growing up without a father, you have no male role models; it’s hard to learn how to be a man,” she says.

Positive influences are important in young people’s lives, there’s no doubt, but framing the argument as if a single mother or two moms even can’t raise a well-mannered son is absurd. I know the argument well, though; it’s frequently been an excuse to keep same-sex couples from marrying and adopting children.

She starts telling me a story to reiterate her point.

She recently went to an event at the public school where the kids, including her own, played instruments together. “And there were no fathers there,” she says.

I nod. “Was your son’s father there?”

Maybe the black kid’s dads are working? When you’re trying to make a point, don’t lead with an example you can’t even answer in the way you judge it should be answered. That’s just bad logic.

My official response is “Oh right.”

At some point she starts talking about the low IQs in the area, again only a characteristic of the blacks.

See what’s interesting to me is that this woman, whose husband owns the bar, expects black people, who she thinks are dumb and lazy, to work for her. As she leads me to the back patio to smoke, I notice an African American man working in the kitchen. I wonder what he thinks about her assessment? I never got the chance to ask.

After a smoke, I pay for my libation and pack up. The bartender gives me the name of some lawyer that I should talk to and then tells me to come back in if I’m still around.

“I’ll try to get back in tomorrow before I leave,” I say.

Driving to Selma it’s all pine and palm trees, small banks and Baptists churches. I’m hoping to find a good angle in Selma about racial tensions and civil rights, but walking around the city I can’t find a single storefront open and the streets are uninhabited.

I read some historical signs about the Selma-to-Montgomery marches, take some pictures of graffiti and trash under the Edmund Pettus Bridge and then head back to the car. On the way, I run into a young African American man bouncing a basketball. 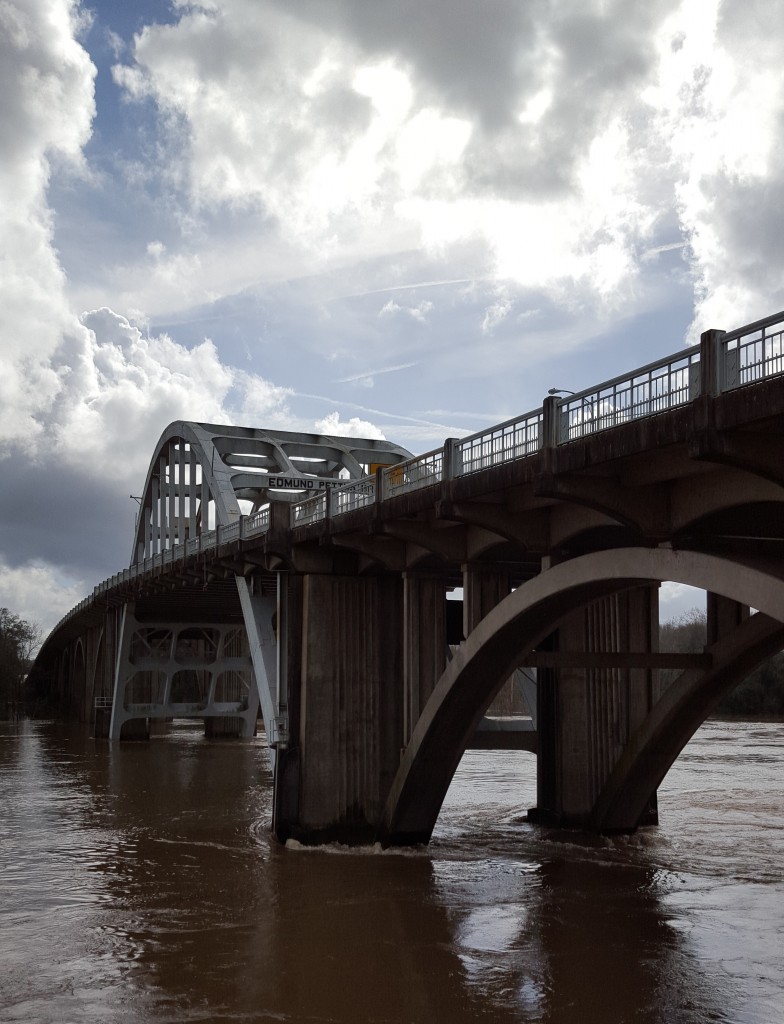 “Where should I eat around here?” I ask, famished.

I get back into the car and head for Birmingham, about two hours north.

Once I get into the city, I head to a cafe I find on Google, but it’s already 3 o’clock and the cafe is no longer serving food. A friend that was formerly a public relations manager for chefs texts me suggesting Jim N’ Nick’s BBQ. The closest one is 1.7 miles away and since I’ve already paid the meter, I decide to walk it. A mile in, all uphill, I’m cursing the Bible Belt for keeping holy the Sabbath.

But I make it into a barstool at 4 o’clock (the first time I’m eating today) and order a Budweiser and a pulled pork sandwich.

As soon as I walk out of the restaurant, an African American man, Steven, walks up to me and asks me if I could spare $9 for a taxi cab so he can go see his son. I don’t have the cash on me, but he knows an ATM down the street so I concede to follow him and pull some money out.

I mention the bartender from the night before, wondering what he thinks about her statements.

“I means some black folks just don’t like to get off their ass,” Steven says. “That’s why the Mexicans are going to take over. But we’ll run them out of Alabama for sure, the white folks and the black folks.”

Steven is a chef at a chain pizza restaurant in town, making $11 an hour. He needs the money because he doesn’t get paid till Friday and last week’s check had run out.

A police car pulls out of the gas station we’re walking to and he says the cops were looking at us funny. I mention worrying about the police now because of all the videos of brutality splashed across the internet.

“These cops ain’t gonna mess with you. Your a pretty white woman. And you ain’t scared of nothing,” he says.

Ding. Ding. Ding. It’s something I’ve been wanting to mention on the blog for some time, but didn’t have a transition to do so. While being a white male is at the top of the privilege pyramid, being a white woman has it’s perks as well.

It’s unlikely anyone will mess with me, excluding cat calls and asking for my number or soliciting me for money. Police officers generally aren’t worried about me breaking the law and so even if I am, their heads are usually turned. And a smile has gotten me a flagrant amount of free drinks.

He offers to walk me back to my car, now about three miles away.

As we’re on the way, a young white guy asks me for a cigarette. I hand one over and he pulls out a wad of cash and a lighter.

“What the fuck you doin?” Steven asks the guy. “How you gonna bum with a whole wad of cash?”

It’s endearing, Steven standing up for me.

On the way back, Steven tells me how pretty I am and how people are staring at us because we’re such a different looking couple. Even the homeless man asking for change outside a run down theatre was supposedly looking at my ass.

It’s all so patriarchal, thinking I give a shit people are pleased with the way I look.

He’s trying to get me to stay in town and have a few drinks with him at the Mellow Mushroom.

What happened to meeting his kid?

He says I’m breaking his heart, an effort to guilt me into staying and while it works many times, I’m way passed annoyed with Alabama.

As I approach my car, I start the good-bye.

“Will you do me one more favor?” he asks.

“You have to promise.”

“Can I get another twenty?”

He already bought a tallboy Bud Light for our walk back.

“You can get it out tomorrow,” he pleads.

Him standing up for me just seems hypocritical now.

These people are exhausting. In this moment, declining calls from him as I drive to Oxford, Mississippi, I understand the irritation of the group of people that label themselves conservatives, that rant on about paying taxes that will then go towards people that use and abuse the system, that take what they can get and then ask for more.

I could use the experience to shape a racist opinion. And people do. But the problem with racism is that it relies on skin tone as an excuse for systemic failures. Racism is a lazy ideology; it’s (while disgusting) a problem with an easier fix. Systemic issues like crumbling schools in predominantly black neighborhoods, like the lower rate of hire when African Americans with the same skills are up against a white person for a job, like blacks getting incarcerated at higher rates, are problems without a simple solution.